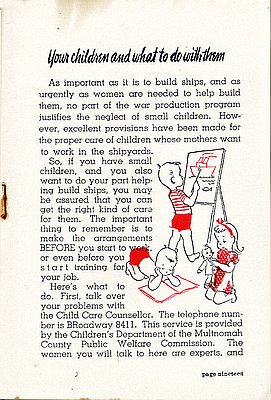 During World War II, women were actively recruited for employment in the nation’s defense industries. In Oregon that meant laboring in the shipyards. Such employment proved attractive, offering working women a considerable advance in wages and the opportunity to perform skilled labor previously the domain of men. In addition, many valued the work as a substantial contribution to the war effort.

Increased reliance upon women to fill the labor void, however, posed a number of problems for both workers and employers. Concerns about child-care surfaced quickly. Questions arose regarding the effects the absence of working mothers might have on their families. Employers attempting to fill production quotas were faced with unexpected absenteeism from workers trying to balance the needs of home with those of the job.

Though state- and county-run childcare centers existed, most mothers were reluctant to enroll their children. Resistance to group child care came from a number of sources. The general impression that group care was not healthy for children was reinforced by the Depression-era stigma that associated group child care with poverty and welfare. Also, the logistical complications of transporting children to and from care centers posed a problem, especially for those women who were working evening or night shifts.

Some suggested solutions to the childcare problem proved inadequate. The idea to accommodate mothers with a flexible schedule was unfeasible in a shipyard environment that demanded regularity in the production line. A plan not hire women applications with small children was equally unrealistic. Eliminating such a large portion of the workforce was impossible given both the growing labor shortage and the fact that women had become a vital part of the skilled labor essential to the shipbuilding trade.

This left the rather ambitious option of the building of specialized child care centers as the most plausible solution. Shipyard magnate Henry Kaiser, who viewed the child-care issue as a “production problem,” constructed two large child-care centers at Oregon Shipbuilding and at Swan Island. Operating around the clock, the Kaiser centers could feed and care for as many as 450 children a day. It was an innovative solution to a pressing problem and it spurred other child-care programs in the area to expand their hours and capabilities. As women began to use the facilities, the stigma associated with group child care began to fade. Just as high wages would disappear at the end of the war, so, too, would the on-site child-care system of the Kaiser shipyards.

Hermina “Billie” Strmiska was thirty-five when she won the Oregon Shipbuilding Welderette contest in March 1943, beating out one hundred other women welders in the standard American Bureau of Shipping Test. Her victory qualified her to compete in a national contest at Ingalls Shipbuilding Company in Mississippi. The contest was …