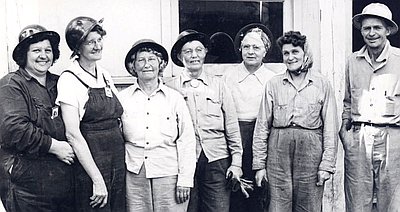 The lucrative shipbuilding contracts given to Oregon shipyards during World War II created new job opportunities for women, who were recruited to fill jobs left open by men drafted into the armed services. The jobs were well-paid and interesting, which attracted women from all over the region. Although most women who worked for shipyards were already in the workforce in some capacity, many women who had either retired or had never worked showed up at the employment office.

This meant that older, married women asked for and received jobs in wartime industries, against traditional labor trends. This "Grandma Crew" at the Portland Oregon Shipbuilding Co. was not a typical work crew, but it was also not unusual during the most productive shipbuilding period. An interesting consequence of this demographic trend was that older women were less available to their working daughters to provide childcare; which, in part, led to the shipyards setting up childcare centers for their employees.