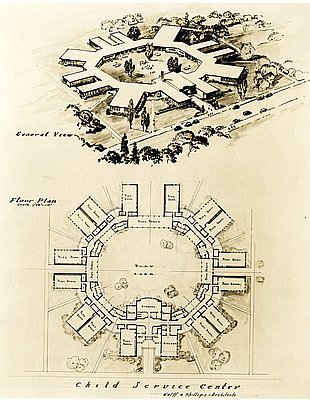 At the entrance to the Oregon Shipyard Corporation’s (OSC) facilities on Portland’s Swan Island in the Willamette River, the company built a large, onsite daycare center for its workforce. Between November 1943 and September 1945, the Child Service Centers cared for over 4000 young children while their parents labored in the yards.

The centers were the idea of Edgar F. Kaiser, vice-president and general manager of Kaiser Shipyards—the parent company of OSC. Kaiser saw the centers as a solution to the childcare problem faced by his workers, especially by the thousands of women who were recruited to the shipyards during World War II. As a result, the onsite daycare centers reduced absenteeism and improved employee satisfaction.

The shipbuilding industry, the federal government, educators, and parents collaborated on the planning and building of what would become an innovative endeavor in modern childcare. The construction of the centers was financed by the U.S. Maritime Commission, and much of the operating costs were supplemented by the Kaiser Shipyards.

The centers were built to be convenient for the parents to drop off children on the way to their shifts: it was a straight line from home to the Center, and then to the ways (the ways are the timbers on which a ship is built and then launched). The buildings were designed by Wolf & Phillips Architects of Portland in the shape of a wheel. The “hub” was a protected space in the center with a play area, partitioned by age levels. The “spokes” held fifteen playrooms with long banks of windows on either side. The facilities—toilets, sinks, lockers, and shelves—were all child-sized.

James L. Hymes, Jr., the resident director, managed the centers. Teachers with specializations in early childhood education were recruited from all around the United States. Mary "Billie" Willett, a graduate of Mount Holyoke College, was one of those recruits. She left her teaching position in New Haven in January 1944 and traveled to Portland to teach the five-year-old group at the Swan Island Center.

The centers were open 24 hours a day to children who ranged in age from 18 months to age six. Older children could be enrolled for overnight care to accommodate parents who worked nightshifts. The facilities included a staffed kitchen and an infirmary, which cared for sick children and provided basic medical services. The centers also provided Home Food Service: any worker in the yard could buy prepared meals to take home at the end of a shift.

The childcare centers were integrated and open to the children of the growing African American workforce at the shipyards; but the racial prejudice by the white families was so severe, that most Black parents arranged for their own childcare. Very few African American children attended the schools.

The centers became well known for their innovative approach to early childhood care and education. Parents' Magazine awarded the Centers its medal for Outstanding Service to Children in 1944. The Office of War Information, through a broadcast, newsreels, and a traveling photo exhibit, shared the story of the centers internationally.

The war ended and the shipyards closed. After only twenty-two months of operation, the groundbreaking onsite childcare system that catered to the specific needs of working parents through innovative design and affordable access was shuttered. The building was used as a Naval & Marine Corps Reserve Center until 1975, when it was demolished to make room for industrial buildings.

Click here to see a pdf version of this issue.

The Bo’s’n’s Whistle was an in-house publication distributed to employees of the Oregon Shipbuilding Corporation (OSC), owned by Henry Kaiser. The name comes from the bosun’s whistle, an instrument used by naval boatswains to alert crewmembers to ship commands. …