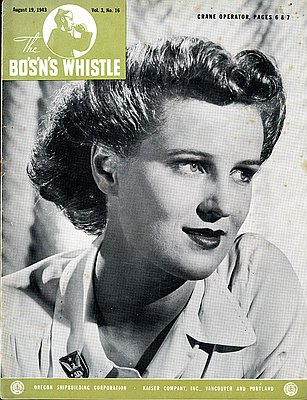 Click here to see a pdf version of this issue.

The Bo’s’n’s Whistle was an in-house publication distributed to employees of the Oregon Shipbuilding Corporation (OSC), owned by Henry Kaiser. The name comes from the bosun’s whistle, an instrument used by naval boatswains to alert crewmembers to ship commands. Kaiser built and operated three shipyards along the Willamette and Columbia Rivers between 1941 and 1945—two in the Portland area and one in Vancouver, Washington— which employed tens of thousands of men and women.

Bo’s’n’s Whistle began as a modest, two-color publication, but it quickly grew into a glossy magazine, distributed every two weeks. In 1944, its format changed and split into three separate weekly newspapers, distributed separately to each shipyard.  No editors or writers were given bylines. Instead, the magazine listed the editors as “You” and the reporters as “The Rest.” The magazine served a variety of purposes: providing news about the company; featuring and applauding employees; creating a sense of workplace community; and communicating company work philosophies, such as hard work, safety, proper behavior and dress, patriotism, and punctuality.

The Oregon Shipbuilding Corporation yards were considered “emergency shipyards,” which meant that they were built quickly and given massive construction orders to fill as quickly as possible. Faced with a labor shortage, Kaiser worked with the federal War Manpower Commission (WMC) and the Office of War Information (OWI) to recruit women into these urgent wartime jobs. This issue of Bo’s’n’s Whistle, reproduced in whole here, provides a glimpse into an important aspect of World War II labor in Oregon—that women made up approximately 30 percent of the workforce in the shipyards. The first two women hired started work as welders in April 1942; by 1944, about 40,000 women worked side-by-side with men throughout the yards.

The presence of women was both welcome and troubling to the male employees. They needed the labor help, but they were also wary of women’s capabilities and temperaments on the job. As women stepped out of their traditional gender roles, they challenged stereotypes about feminine frailty and domestic responsibilities. This tension is illustrated throughout the magazine, beginning with the glamour shot on the cover of a young welder and continuing in cartoons about domestic chaos brought on by shipyard employment.

Publications such as Bo’s’n’s Whistle had a complicated mission: they were designed to encourage women to work in the shipyards by welcoming them and acknowledging their contribution, while also putting men at ease with their female counterparts by pointing out traditional gender differences.  Beauty contests, dress and make-up tips, and shipyard romance stories were all included in the magazine to encourage this understanding. This is especially apparent in the section about post-war employment. The featured women reassure readers that they will not attempt to stay in the industrial workforce after the war, a recurring anxiety for men fearing competition from women who were now trained and skilled at jobs traditionally held by men.

This photograph comes from the Oregon Shipbuilding Corporation collection; it was likely part of the company's series of publicity photos it used in its various publications and news releases. In the photo, a man and a woman use templates to build patterns of various ship parts.