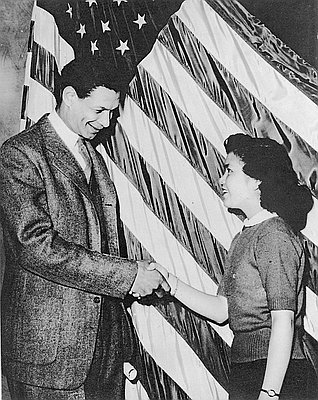 The Portland Urban League was established in 1945 during a time of racial strain between Portland’s black and white communities.  Beginning in 1941, blacks began streaming to the city to join the wartime industrial workforce.  Between 1941 and 1943, Portland’s black population grew from 2,000 to over 20,000 residents.  Despite wartime fair employment laws, Portland, and Oregon, retained their reputation for hostile race relations with a legacy of anti-black legislation and discrimination in state and local unions and through employment laws that limited the ability for blacks to secure middle and higher-income jobs.   The Urban League of Portland addressed these long-standing issues.

Under the leadership of Portland’s first black physician, Dr. DeNorval Unthank, the National Urban League, with its hub in New York City, opened a Portland Chapter in April 1945.  Shortly thereafter, Edwin C. “Bill” Berry, shown in this photo, was named the Portland Chapters first director.  The challenges facing Berry and the newly established Urban League were many: Portland remained a segregated city where “White Trade Only” signs were frequently posted in business windows and restaurants, downtown hotels still refused to serve blacks, and the Portland Real Estate Board’s Code of Ethics mandated real estate agents not sell to individuals whose race would “be determined to lower property values in that neighborhood.”  The job market remained staunchly opposed to admitting blacks into most middle-income and white-collar jobs.  Under Berry’s leadership, the Urban League took aim at the job market, then at housing, education, and even racial distortions and discrimination in the news media.

Since its inception, the Portland Urban League and Portland race relations have changed greatly.  Segregation no longer dominates the civil rights agenda, discrimination in housing standards is illegal, and blacks hold careers at all levels of the economic spectrum.  At the same time, economic disparity between predominantly white and predominantly black neighborhoods and schools still afflict the city and its residents.  The Urban League remains committed to addressing these and other issues with a focus on improving education and economic self-sufficiency among African Americans.

Signs similar to this one in the window of the Denver Cafe, across the street from the Kenton Theatre in north Portland, popped up  during World War II. Acute labor shortages and a booming wartime industrial job market expanded Portland’s African American population from 2,565 in 1940 to 25,000 in …