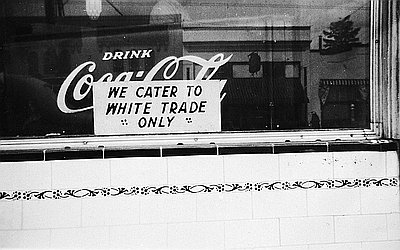 Signs similar to this one across the street from the Kenton Theater in north Portland popped up around the town during World War II. Acute labor shortages and a booming wartime industrial job market expanded Portland’s African American population from 2,565 in 1940 to 25,000 in 1944. The demand for labor, along with the wartime Fair Employment Practices Commission, buffered to some extent the racism that permeated Portland’s private industry and local unions. In her memoirs, Kathryn Hall Bogle, recalled her wartime experience working as one of the first black women to hold an office position in government at the U.S. Employment Office. There, Hall witnessed wartime racism as well as new opportunities offered blacks in the public sector. For instance, Hall recalled blacks being turned down for specialized jobs they had worked all their lives including stevedores, truck drivers, and laundry workers because of union laws that did not allow blacks to join their ranks. At the same time, blacks were hired freely for common labor and in all shipyards except the Albina Shipyard, which was privately owned. Training programs for shipyard skills and shipyard crafts were also offered to blacks and whites alike.

Racism against blacks continued through the wartime era in the job market and in urban housing standards. Blacks did not sit by idly, however. Several agencies, including the Portland branch of the National Association for the Advancement of Colored People (NAACP), the Urban League, the Office of Vocational Opportunity, and the Committee on Inter-Racial Principles and Practices, established and continued to operate already established institutions in Portland that sought to provide a voice for Portland’s black residents. Through today these groups continue to represent Portland’s black community through education, employment programs, legal representation, and the promotion of equality and civil rights.