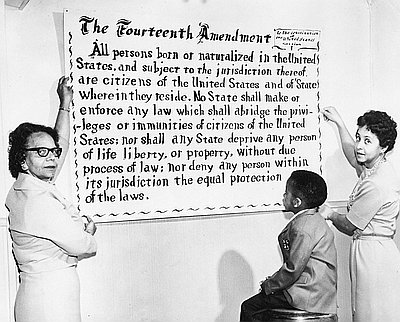 This 1964 photograph shows Sylvia N. Thompson (left) with her daughter Addie Jean Haynes and Addie's ten-year-old son Bryan Haynes (later Dr. Haynes, DDS) holding up a poster-sized copy of the Fourteenth Amendment at the Portland office of the National Association for the Advancement of Colored People (NAACP). The Fourteenth Amendment, which Congress passed in 1868, gave African Americans the rights of American citizenship — including state citizenship and the right for men to vote. At that that time, American women did not have the right to vote.

The national NAACP formed in 1909, and in 1914, a local chapter formed in Portland. Dr. J.N. Merriman was the first president, and the chapter’s first secretary was Beatrice Morrow Cannady, the editor of an African American newspaper, the Advocate.

One of the chapter’s earliest goals was to remove the exclusion laws from the state constitution. After numerous failed campaigns spanning thirty years, Oregon voters finally repealed the exclusion laws in 1926 and 1927. The Portland NAACP also worked for civil rights legislation in Oregon, fought to get African Americans into labor unions, and opposed discriminatory city housing policies.

In 1964, the NAACP chapter marked their 50th anniversary by a moving into new offices on North Williams Avenue in Portland. The new office also housed the NAACP Credit Union and a voter registration office.

This flier was distributed by protesters of the National Association for the Advancement of Colored People (NAACP) on September 30 and October 4, 1963, at Portland’s City Hall and the nearby Federal Building to draw attention to the segregationist practices of the Housing Authority of Portland (HAP) and the NAACP’s …