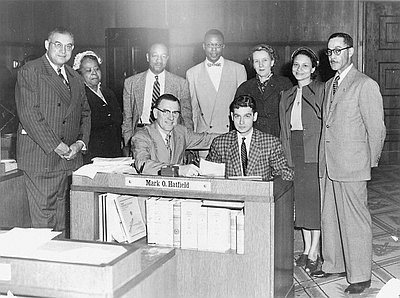 In 1953, Oregon’s Civil Rights Bill was signed by Governor Paul L. Patterson, making Oregon the twenty-first state in the union to pass legislation outlawing discrimination in public places.  The bill was passed in the senate under the leadership of Philip S. Hitchcock by a vote of 21 to 9, and in the house by a vote of 46 to 11, shepherded by the efforts of Mark O. Hatfield.  Opponents unsuccessfully attempted to amend the bill by including a provision to refer the legislation to Oregon voters as a legislative referral.  With its passage, Oregon ensured “[a]ll persons within the jurisdiction of this state shall be entitled to the full and equal accommodations, advantages, facilities and privileges of any place of public accommodation, resort or amusement, without any distinction, discrimination or restriction on account of race, religion, color or national origin.”

Soon after its passage, a group called the Civil Freedom Committee announced its intent to circulate petitions for a state-wide referendum to challenge the bill.  Led by Rev. Elbert D. Riddick, rector of the Church of the Good Shepherd in Portland, the Civil Freedom Committee argued that the Civil Rights Law was a violation of Oregonians’ freedom of choice. In 1950, the same committee was successful in its attempts to defeat a similar ordinance in Portland that outlawed discrimination in public accommodations within the city’s limits. Riddick railed against the imposition of “unwanted companionship” and “compulsory ‘equality’” by the “police power of the state.”  But, without the endorsement of any of Oregon’s major newspapers or labor unions, the Civil Freedom Committee was unable to collect the 23,375 required signatures needed to put the Public Accommodations Bill on the 1954 general election ballot.

Signs similar to this one in the window of the Denver Cafe, across the street from the Kenton Theatre in north Portland, popped up  during World War II. Acute labor shortages and a booming wartime industrial job market expanded Portland’s African American population from 2,565 in 1940 to 25,000 in …