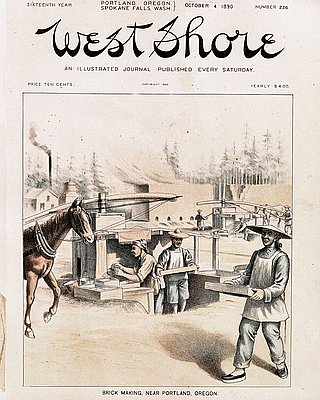 This lithograph served as the cover for the October 4, 1890, issue of West Shore magazine. The magazine, headquartered in Portland, was published from 1875 to 1891 by Leopold Samuel. This image depicts Chinese laborers working in East Portland or Albina — then towns outside Portland — making bricks from clay and sand. By 1890, brick making had become an important business in the Portland area: in 1889, 8 million bricks were shipped to the Seattle area. This boom in production was possible due to the availability of inexpensive immigrant labor and the introduction of new machinery, such as the brick presses shown in the illustration.

When Samuel published the inaugural issue of West Shore in August, 1875, he announced that his purpose was to make it “the literary paper of the Pacific Northwest.” In addition to Samuel’s ambition to produce a literary magazine, he also demonstrated a long-term commitment to high quality artwork and publication standards. Throughout the 1870s and 1880s, West Shore featured some of the most accomplished print lithography of the period, including multi-colored prints in later years. Samuel’s vision for the magazine was to promote a positive image of the Pacific Northwest. Samuel was especially interested in marketing the magazine to “the right kind” of potential immigrants, meaning Europeans and Euro Americans. In later years, West Shore shifted its focus from potential immigrants to visitors and residents of the region.

Through its nearly sixteen-year run, West Shore magazine expressed the views of its publisher with regard to immigration. Like most Euro Americans of his day, Samuel viewed the Chinese as one of the “undesirable” immigrant groups alongside the Japanese. Articles in West Shore demonstrated both indifference and racial prejudice towards the Chinese. While Samuel did view the Chinese as inferior to Euro Americans, he deplored the physical violence against Chinese immigrants that was prevalent throughout the Pacific Northwest during the latter decades of the 19th century.

A Night in Chinatown

The October 1886 issue of West Shore magazine, based in Portland, featured this lithograph and an article under the title A Night in Chinatown.

By the 1880s, Chinese immigrants had been living in Oregon for more than thirty years. At the time, the state’s Chinese population was roughly 9,500, …