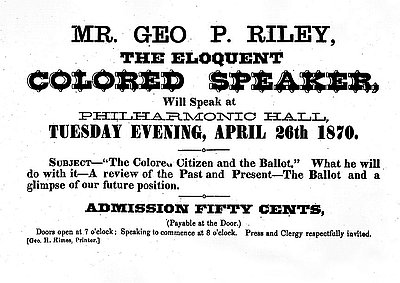 Local printer George H. Himes produced this poster in April 1870 to publicize an upcoming lecture by Portland resident George P. Riley at Philharmonic Hall on the third floor of a building at 75 First Ave (now 235 First Ave). Riley’s Portland lecture on April 26, 1870 followed an earlier talk in Salem on January 1st. Both of Riley’s lectures were intended to draw attention to important milestones in African American history. Riley delivered his initial lecture at the Salem celebration commemorating the seventh anniversary of the Emancipation Proclamation, which freed slaves in the Confederate States. He gave the second lecture a few weeks after Portland’s “Ratification Jubilee,” which celebrated the passage of the 15th Amendment, the amendment that extended voting rights to black men in the United States.

During the Reconstruction period (1866-1877), which followed the Civil War, African Americans in Oregon remained a small minority. In 1870 there were approximately 318 African Americans in the state, 154 of whom lived in Portland. This group faced legalized discrimination, widespread racial prejudice, and local attempts to enforce segregation in the developing public school system. This history of legalized racial discrimination in Oregon dated back to the 1840s and the 1850s when both the Provisional and Territorial Governments banned slavery while also excluding free blacks from residing legally in Oregon. In the decades following the Civil War, the Oregon State Legislature declined to ratify the 14th and 15th Amendments to the U.S. Constitution, the amendments which extended basic citizenship rights to African Americans.