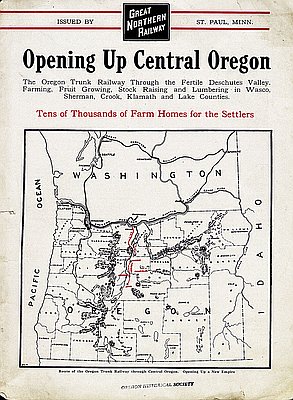 In 1911, laborers completed the Oregon Trunk Railroad from the Columbia River, near Celilo Village, to Bend, giving large timber companies a way to export timber from the region’s pine forests. Starting in 1908, railroad rivals E. H. Harriman and James J. Hill competed to build the railroad south into central Oregon. Both Hill, who owned the Great Northern and Northern Pacific railroads, and Harriman, owner of the Southern Pacific Railroad, were closely associated with lumber companies. Their companies each financed railroad construction on opposite sides of the Deschutes River, but were forced to combine their efforts in the Deschutes River Canyon, where a narrow gorge made it impossible to build two separate tracks.

At the beginning of the 20th century, Minnesota-based lumber companies that had depleted timber resources near the Great Lakes, bought forested land throughout the Pacific Northwest. In 1916, the Shevlin-Hixon and Brooks-Scanlon companies established sawmills in Bend, and their loggers began heavy cutting in nearby forests. In the following years, the competing mills each tried to out-produce the other by upgrading their technology and capacity and running several work shifts a day. Bend’s population grew from 536 in 1910 to 5,414 in 1920. By 1950, the regional timber resources were mostly depleted, and the large mills soon shut down.

In 1909 and 1910, railroad companies sent farming demonstration trains on tour throughout Oregon to promote improved agricultural practices, in an effort to ensure and improve reliable freightÂ business between farmlands and marketplaces. Crowds greeted the trains at depots and looked at a variety of exhibits in the cars, including a …