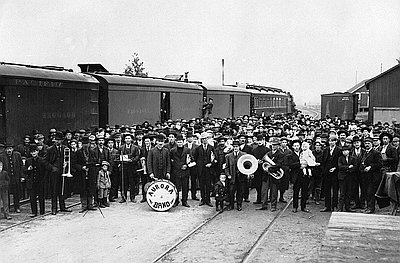 In 1909 and 1910, railroad companies sent farming demonstration trains on tour throughout Oregon to promote improved agricultural practices, in an effort to ensure and improve reliable freightÂ business between farmlands and marketplaces. Crowds greeted the trains at depots and looked at a variety of exhibits in the cars, including a poultry exhibit stocked with nesting fowls. Professors and scientists traveled with the trains, giving agricultural lessons at each stop. Railroad employees also worked with farm bureaus and other organizations to conduct soil surveys, establish production standards, and develop irrigation districts.

In March 1909, James Withycombe, then a professor at Oregon Agricultural College—now Oregon State University—traveled with other professors on a Southern Pacific Railroad tour between Ashland and Drain, making thirteen stops in three days. Withycombe, who was Oregon’s governor from 1915 until his death in 1919, was an advocate for scientific farming.

Religious leader William Keil founded Aurora in 1856. Keil and 252 followers of his separatist Christian religion owned up to 15,000 acres communally. They farmed, established a town, and built furniture and crafts before disbanding in 1883.

This photograph of the Aurora Band (also referred to as the Pioneer Band) was taken some time after the original religious communal society of Aurora had been dissolved in 1877. The band was most likely waiting for a train—which stopped opposite the Pioneer Hotel (in background of photo)—to entertain people …

This photograph was taken in 1889, looking southeast from one of the balconies on the 114-foot tall church bell tower in Aurora, Oregon. Although the original communal colony known as Aurora was officially dissolved in 1877, many of the colony’s members continued to live and work there. Structures in the center …