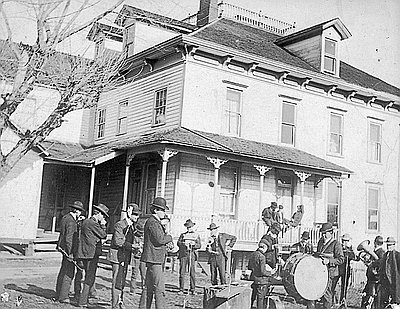 This photograph of the Aurora Band (also referred to as the Pioneer Band) was taken some time after the original religious communal society of Aurora had been dissolved in 1877. The band was most likely waiting for a train—which stopped opposite the Pioneer Hotel (in background of photo)—to entertain people arriving in Aurora, or they were preparing to travel for a performance in another town. Although the Christian communal society of Aurora officially lasted only from 1857 to 1877, many of the members continued to live and work there after the colony was officially dissolved.  The Aurora Band, for example, continued to perform into the 1920s.

The Aurora colony had a very strong musical tradition and a variety of opportunities for people to practice and perform.  The community had two bands—the Pioneer Band (made up of adult males), the Junior Brass Band (made up of older boys and young men), a variety of male chamber music ensembles, and at least three choirs (one each for boys and girls and one co-ed). Additionally, both men and women frequently sang together at community gatherings. There are also historical references to the colony’s orchestra, but two scholars (Deborah Olsen and Clark Will) have attributed those references to the likely inclusion of stringed instruments in performances by the Pioneer Band or to public performances of chamber ensembles.

During the years of the Aurora colony’s existence, the Pioneer Band contributed its earned income to the communal treasury.  Still, most music was played within the community.  According to Olsen and Will, the Aurora colony “was a society which shared deep Christian convictions and which used music to reaffirm its faith, to celebrate its religious holidays, to grieve for its dead, to share its hopes and sorrows, and to hail the success of Christian communalism.”

In 1909 and 1910, railroad companies sent farming demonstration trains on tour throughout Oregon to promote improved agricultural practices, in an effort to ensure and improve reliable freightÂ business between farmlands and marketplaces. Crowds greeted the trains at depots and looked at a variety of exhibits in the cars, including a …

This photograph was taken in 1889, looking southeast from one of the balconies on the 114-foot tall church bell tower in Aurora, Oregon. Although the original communal colony known as Aurora was officially dissolved in 1877, many of the colony’s members continued to live and work there. Structures in the center …

This photograph of Wilhelm (William) Keil (1812–1877) was taken sometime between 1855 and 1877. Keil was the founder of two German-speaking Christian communal societies—one in Bethel, Missouri, and the other in Aurora, Oregon.

Keil immigrated to the United States from Germany with his wife, Louise Ritter, in 1835–1836. After a …