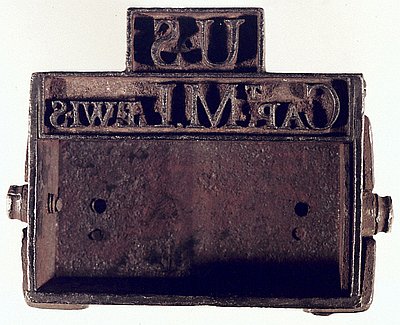 Captain Meriwether Lewis carried this branding iron on the Corps of Discovery’s 1804–1806 exploration of western North America (the captains also carried a smaller "stirrup iron" used to brand horses). The details of this artifact’s manufacture are unknown, but historians have speculated that it might have been produced in 1804 at the armory at Harpers Ferry, Virginia, or perhaps by Private John Shields, a member of the Corps known for his iron-working skills. Lewis probably traded the iron to someone in the spring of 1806 near present-day The Dalles. In the 1890s, Hood River resident Linnaeus Winans found the iron on the north shore of the Columbia River near Memaloose Island. He gave the artifact to Philip L. Jackson, publisher of the Oregon Journal, who donated it to the Oregon Historical Society in 1941.

Irons such as this one were too large for branding livestock and were usually used to mark wooden packing crates, barrels, and leather bags. Lewis’s iron was also used to mark trees as the members of the Corps made their way across the continent. In some cases, tree blazes functioned as property markers. When Expedition members stashed a pirogue on an island near the mouth of the Marias River on June 10, 1805, for example, Clark recorded that Lewis “branded several trees to prevent the Indians injureing her.” Expedition members carved their names into rocks and cliff faces on more than a dozen occasions, leaving a trail of what some historians have termed “graffiti.”

Meriwether Lewis was born in …