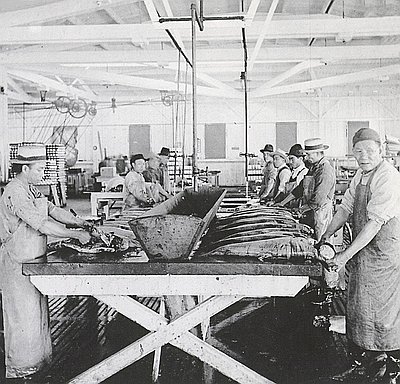 This stereographic image, printed by the Keystone View Company, has this description of the fish-cleaning process written on the back: “One [person] does nothing but cut off heads, tails, and fins. Then he passes the fish onto another man who rips it open and takes out the insides. The next man scrapes off the scales. And so the salmon go all the way down these long rows of tables until they are dressed, washed, and sliced. Then they are put into cans and are shipped to all parts of the world.”

Beginning in the 1870s, Columbia River canneries employed mostly Chinese laborers to clean, chop, can, and cook salmon. An 1880 Clatsop County, Oregon, census, taken at the peak of salmon season, showed that out of a total population of 7,055 people, 2,045 were Chinese. During the 1890s, Chinese contractors hired, fed, housed, and paid laborers for cannery companies but provided workers low wages, substandard housing, and poor food. Chinese people were excluded from fishing jobs, which were held primarily by Euro-American immigrants.

Many labor unions were hostile to the Chinese. In 1882, Congress passed the Chinese Exclusion Act, banning the immigration of Chinese workers for ten years. While Chinese men worked in canneries into the 1950s, most were replaced by Japanese, Mexican, Filipino, and women workers.