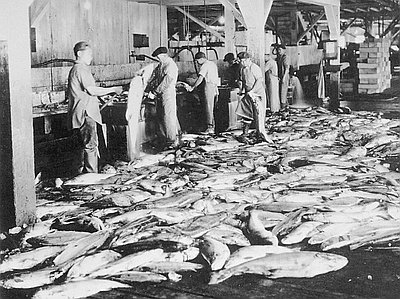 While archaeologists have dated Columbia River salmon harvests back 10,000 years, it wasn’t until the growth of the salmon canning industry on the river, beginning in 1866 with the construction of Hapgood, Hume and Company’s cannery, that substantial numbers of salmon began to be harvested by non-Indians.  Cannery construction expanded until markets were saturated in 1883, when the combined production of thirty-nine Columbia River canneries exceeded 42,000,000 pounds.  After the peak years of the early 1880s, the Columbia River salmon industry began a slow, uneven decline, marked by periodic upturns in the harvest, and by a second peak in production during World War I.

Chinese immigrants first began working as Columbia River cannery laborers in 1872 and quickly dominated the work force.  They endured decades of prejudice and exploitation, marked especially by the passage of the Chinese Exclusion Act (1882) and the establishment of the contract labor system in the 1890s.  Beginning in 1905 Columbia River cannery owners replaced Chinese labor with Smith Butchering Machines, sometimes called “Iron Chinks.” Each of these machines cut, gutted, and cleaned salmon at a rate comparable to the work of 30 to 40 skilled workers.  As the century wore on, and the number of canneries diminished, fewer and fewer Chinese were hired from the increasingly competitive labor pool.