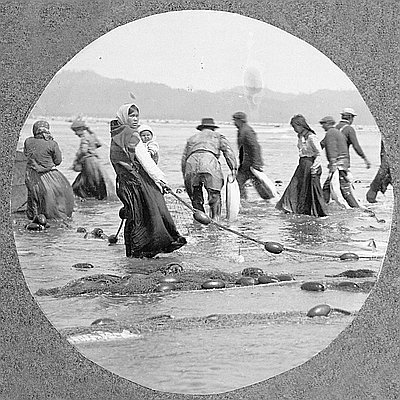 This photograph was taken by John F. Ford, a photographer who had commercial studios in Portland and Ilwaco, Washington, between approximately 1900 and 1914. It shows a group of Chinook Indians using a seine to catch salmon. Writing on the back of the photograph identifies the location as Sand Island, a small island in Baker Bay near Ilwaco, Washington.

Prior to white settlement, Baker Bay and the surrounding area was home to the Chinook Indians, a populous trading people who had a string of villages located on the northern shore of the Columbia River estuary. Salmon occupied a central place in the Chinook economy. The Chinook used a variety of methods to harvest the Columbia River’s abundant salmon, among the most important of which was seining. Seines are long nets that have floats on top and weights on the bottom. One end is attached to the shore and the other end is taken out into the water and circled back around to shore, trapping the fish that are encircled by the net.

James Swan, a Washington Territory settler and ethnographer, described Chinook Indians seining in Baker Bay in the mid-1850s: “The nets vary in size from a hundred feet long to a hundred fathoms, or six hundred feet, and from seven to sixteen feet deep. Three persons are required to work a net, except the very large ones, which require more help to land them….Sometimes the net is hauled repeatedly without success; but in seasons of plenty, great hauls are often made, and frequently a hundred fine fish of various sizes are taken at one cast of the seine.”

The photograph reproduced above shows that the Chinook Indians were still seining in the lower Columbia River during the first decade of the twentieth century. As the salmon runs declined due to overfishing and habitat degradation, however, competition between whites and Indians for fishing sites became more acute. During the latter half of the 1920s white fishermen drove Chinook seining crews off of Peacock Spit and Sand Island, two of the most productive seining grounds in the Columbia River estuary. In 1928 the federal government sued a local cannery in order to affirm Indian fishing rights in the lower Columbia, but the case was poorly presented and the plaintiffs lost. Some Chinook Indians obtained state gillnet licenses, which allowed them to continue fishing in the lower Columbia.

Washington and Oregon prohibited the use of seines in 1934 and 1948 respectively.

This photograph shows Chief George Allen Charley (center in vest and white shirt) and his seining crew in Pacific County, Washington, around 1907. Chief Charley was chief of the Shoalwater Bay Indian Tribe, a mixed group of Lower Chehalis and Shoalwater Chinook. During the first decades of the twentieth century …