Columbia River from the Cascades to Wappato 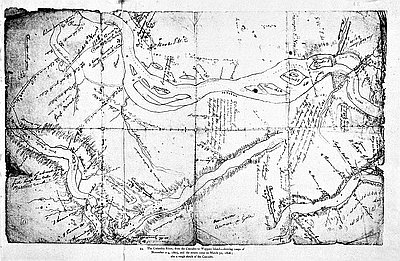 This map, sketched by explorer Captain William Clark in early November 1805, shows the Columbia River between the Cascade Rapids and Sauvie Island — which Clark called “Wappato Island” for tubers that Natives cultivated there. On the map, Clark noted a number of Native American villages, rivers and creeks, and camping sites that the members of the Lewis and Clark Expedition used then and on their return trip upriver in March 1806.

In this sketch, Clark drew a continuous portion of the Columbia River in three sections.  The small river section shown in the lower right corner is the upstream part of the river, beginning where the Klickitat River joins the Columbia River. Above that, Clark sketched the middle portion of this river section, including Beacon Rock, which he identified on this map as “Beaten Rock.” The portion of the river at the top of this sketch shows the area near Portland and Sauvie Island. In this section, Clark noted that a “Supposed River” lay to the south. Clark later explored the lower Willamette River, naming it “Multnomah River,” for the Native Chinookan people that lived there.

Clark’s map shows at least twelve Native villages, ranging in size from two to twenty-five houses. Clark noted one village, near the current location of the Portland airport, which was home to about 200 people. Members of the Expedition encountered several distinct Native groups while traveling this stretch of the Columbia River, including Klickitats, Cascades, and Multnomahs. In his journal, Clark reported that the Natives possessed European trade goods, including a British musket, woven cloth, frying pans, beads, and brass tea kettles.

In 1905, historian Reuben Gold Thwaites included this map in his publication of the Lewis and Clark Expedition journals. One-hundred years after the expedition traveled to Oregon, things had changed significantly for the region’s Native Americans. Up to 90 percent of Willamette Valley and lower Columbia River Natives had been killed by epidemic diseases. Those who survived were forced onto reservations as more and more Euro-American settlers moved onto their homelands. By 1905, very few Native Americans lived on the stretch of the Columbia River shown in Clark’s sketch.