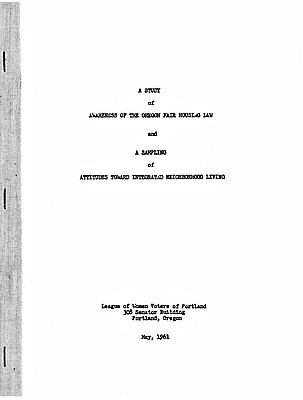 This case study was included as an appendix by the League of Women Voters of Portland in A Study of Awareness of the Oregon Fair Housing Law and a Sampling of Attitudes Toward Integrated Living, released in May of 1961.  According to the report, the case study “was not deduced from the study,” but was “the result of individual research by members of the committee.”  Even so, the problems depicted in the case study were representative of the typical troubles experienced by many home-seeking minorities in Portland.

In 1957, Oregon passed its first fair housing legislation.  The law made it illegal for property owners or their agents receiving any public funding to discriminate “solely because of race, color, religion, or national origin,” in the sale, lease, or rental of any “dwelling place for a person or family…in a building containing five or more such apartments or units.” The limited reach of the law spurred further legislative action, and in 1959 the law was amended to apply to any “person who, as a business enterprise, sells, leases or rents real property.”  A companion bill was also passed in 1959 and amended Oregon’s real estate code to allow for the revocation of any realtor’s license that violated the fair housing law. Although the new legislation was an important step toward the full extension of civil rights to Oregon’s minority groups, the housing law suffered from a lack of enforcement provisions.  The responsibility to prove any violations of the law were laid upon the discriminated person(s). They were directed to file a complaint with the Civil Rights Division of Oregon’s Bureau of Labor and argue their case before a commissioner, a process that could take months to resolve.

In May, 1960, Portland’s League of Women’s Voters organized “a pilot study that could provide a basis for a subsequent study for judging the effectiveness of the law.”  With the help of sociologists from Portland State University and the University of Oregon, interviewers were employed to study ten integrated neighborhoods in Portland “to learn the attitudes toward integration from the residents; to determine whether or not the Fair Housing Law had brought about any changes in the difficulties experienced by Negroes in obtaining houses in areas which had been previously all white; and to create an awareness of the Fair Housing Law and its provisions.”

Two findings were particularly important, though not surprising to many.  First, the study found that “they [African Americans] have lower incomes than whites with a similar educational level and the housing they find available to them is in neighborhoods which are of a lower economic class than neighborhoods where whites of a similar educational level live.”  Second, findings from the study also suggested that “increased contact with people of a different race leads to increased understanding.”