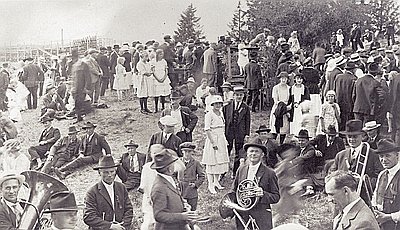 Astoria was home to the largest settlement of Finns west of the Mississippi. The first Finns came to Astoria in the 1850s from San Francisco. By 1905 Astoria’s Finnish population numbered 2,027, more than 18 percent of the town’s total population. Most lived in an area known as Uniontown, named after the short-lived Union Cannery.

Many of Astoria’s Finns worked in the fishing industry, primarily as gillnetters. In 1879 the gillnetters of the lower Columbia River formed the Columbia River Fishermen’s Protective Union (CRFPU). By 1890 the union had about 2,500 members, about 40 percent of whom were foreign-born. Most of the foreign-born members were Scandinavian, including a large contingent of Finns.

Finnish fishermen were active participants in the great fishermen’s strike of 1896. When the CRFPU voted to go back to work after negotiating a compromise with the cannerymen, many Finns refused to go along. The Oregonian reported on June 23, 1896 that “a number of Finnish fishermen have not yet gone out, nearly all of them being dissatisfied with the action of the union in accepting the compromise. Today several hundred are reported to have sent in their resignations…with the intimations that they would have nothing more to do with the union.” There is no indication that Finns actually left the union en masse, however. Soon after the strike, Finnish fishermen played an instrumental role in the formation of the Union Fishermen’s Co-Operative Packing Company, a worker-owned cooperative that became one of the largest canneries on the Columbia River.

Finns tended to be more radical than other Scandinavian immigrants. Historian Paul George Hummasti notes that “while the Finns were one of the smaller immigrant groups in America, they were one of the largest (and at times the largest) ethnic groups in twentieth-century socialist parties of this country.” Astorian Finns formed the Finnish Socialist Club in November 1904. Although the leading members sought, as one expressed it, “to remove the yoke of wage slavery from the shoulders of the working class,” others were more interested in a social organization that could act as an alternative to the sometimes stifling atmosphere of the Finnish churches and temperance societies. The Finnish Socialist Club remained active until 1940.

Merchants, craftsmen, and other members of the middle class described churches as the center of social life. By the late 1850s, mainstream Protestant denominations—Methodists, Baptists, Congregationalists, Episcopalians, and Presbyterians—as well as Catholics and German Jews had organized congregations and constructed churches along Third, Fourth, and Fifth Streets. By 1880, the …