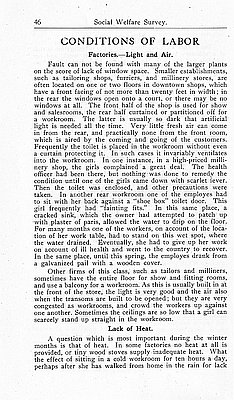 This document is a selection from a report that the Social Survey Committee wrote for the Consumers’ League of Oregon. The report described the committee’s work conducting the Social Welfare Survey, an analysis of wages, hours, working conditions, and standards of living for Oregon’s working women, with an emphasis on Portland. The excerpt is the first page of the report’s “Conditions of Labor” section. It describes the poor ventilation, inadequate lighting, and other unsatisfactory labor conditions that some female wage earners endured during the first decades of the twentieth century.

The Social Survey Committee of the Consumers’ League of Oregon organized in 1912 upon the request of Florence Kelley, Secretary of the National Consumers’ League. The NCL was one of the nation’s strongest advocates for protective legislation for women laborers. The national organization, impressed with the commitment to protective legislation demonstrated by the Oregon branch during the 1908 Supreme Court battle in Muller v. Oregon, viewed Oregon as an ideal state to advance their next campaign—the enactment of state laws establishing a minimum wage for women.

The Consumers’ League of Oregon intended the Social Welfare Survey to provide Oregon legislators with scientific evidence to demonstrate the need for a minimum wage law in Oregon. The survey had three primary objectives—to report on women’s wages in all lines of work, to determine the cost of living necessary “to preserve their health and their morals,” and to record the working conditions under which women labored.

The study demonstrated the extent to which women wage earners at the turn of the twentieth century supported themselves or vitally contributed to their family’s income—many did not work simply for “pin money,” or extra cash, as was commonly alleged. Members of the Consumers’ League of Oregon submitted the survey to the Oregon State Legislature with the Minimum Wage Bill they drafted. The survey helped obtain a near-unanimous consensus to among Oregon state legislators to pass the bill in the spring of 1913.