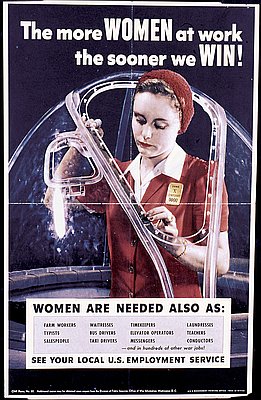 This poster was issued by the Office of War Information after the United States’ entry into World War II had drained much of the available male labor supply from the nation’s wartime industries.  The chest pin worn by the woman in the poster, “Zone X Temporary,” reflects the conviction of the U.S. War Production Board (WPB) that a sizable number of “married women without children under the age of ten” would be “the best source of workers for the duration of the war.”  The WPB believed that “housewives” were ideal for wartime needs, expecting them to voluntarily forfeit their jobs to returning servicemen at the war’s end.

The call for female labor was effective, drawing millions into the wartime production effort.  Widespread employment policies that had prohibited the hiring of married women, popularly called “marriage bars,” were largely cast aside, since the need for labor outweighed the long-held fears of married women “stealing” men’s jobs.  Propaganda posters and the American media popularized the image of “Rosie the Riveter,” the patriotic, hard-working housewife who temporarily exchanged her skirt and apron for a pair of overalls and a work-belt.

Even during the wartime labor shortage, gender and racial prejudices continued.  Before many employers opened their ranks to women, they first exhausted the local male labor pool, drawing from men from all backgrounds save Japanese. Then, industries turned their attention toward women.  But, the opportunities available to women of color paled in comparison to those open to white women.   Even Black women with specialized training typically found themselves relegated to menial, “dirty” jobs in the industrial workplace.  Facing resistance from white co-workers, employers, and even labor unions, Black women were among the last people hired during the war years.

When the war ended in 1945, American industry “reconverted” to consumer-driven market production.  In the process, many Americans lost their jobs or were laid off.  Women, however, were displaced from industrial jobs at rates far higher than men.  And, women of color lost their jobs at rates above their white counterparts.  Contrary to the expectations of the WPB, the majority of women did not leave their jobs voluntarily.  Instead, labor unions and employers worked in tandem to remove them from the workplace.  Even with the massive loss of wartime jobs, American women continued to look for and find work.  Consequently, by 1950 the number of women gainfully employed in the United States had once again reached wartime highs, though they were primarily working in non-industrial occupations.

This Oregonian article announced the United States Supreme Court’s opinion in the Muller v. Oregon case. It described the Court’s decision to uphold an Oregon state law that forbade employers in mechanical establishments, factories, or laundries to work their female employees longer than ten hours in one day. The Court’s …