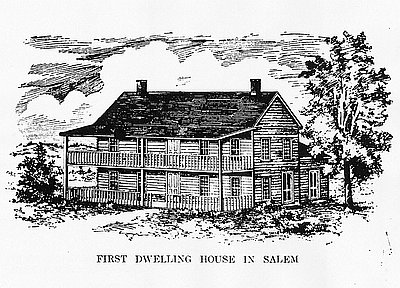 This engraving, published in a state history in 1912, depicts the house built by the Rev. Jason Lee at the present site of Salem in 1841. The house sheltered Lee’s wife Lucy Thompson Lee and their daughter, as well as three other families connected with Methodist missionary efforts.

The Methodist missionary group led by Jason Lee settled first at Mission Bottom, north of present-day Salem. The log buildings at Willamette Mission were erected in the fall of 1834, with houses for the missionaries and a school for Indian children. Within a few years, the focus of the enterprise changed as Lee and his colleagues faced a declining Indian population that also resisted their religious teachings. When a sawmill was established in 1841 on Mill Creek at Chemeketa (present-day Salem), part of the Willamette Mission moved to this new settlement. Here the focus of their work changed from evangelizing among the Indians to ministering to the increasing number of American immigrant settlers in the Willamette Valley.

The Lee house was built with lumber from the new water-powered mill, sheathed in boards that were laid horizontally over a hand-hewn wood frame. The two-story rectangular house had a low-pitched gable roof, and there were fireplaces at each end, built within the house and serving both floors. The windows were double hung (two wooden frames, one over the other, which could be moved up and down to open them), and each frame contained nine small panes of glass (known as lights). The windows were framed by a simple border (surround) of boards. A porch and a covered balcony extended across the front of both floors of the house. A central hallway with a balustraded stairway divided the house into two rooms on each side. The kitchen was in a shed attached to the rear of the main building.The symmetrical design was a common plan for vernacular houses of the American colonies in the late eighteenth and early nineteenth centuries.

Early residents of the house included the Lee family as well as those of Rev. Josiah (a blacksmith) and Elizabeth Parrish, William Raymond, and Almira and Lewis Judson (he was a missionary, cabinet maker, and wheelwright). The household was initially comprised of at least eight adults and eight children.

Along with Lewis Judson and Josiah Parrish, Jason Lee was active in early efforts to form a provisional government in Oregon. The Lee house underwent numerous changes and additions over many years, and was slated for demolition in 1963. However, it was rescued, stripped of some of its add-ons and moved to its present location at the Mission Mill Museum. Extensive work has been done to return it to a semblance of its original appearance. It was placed on the National Register of Historic Places in 1973, and it is currently a historic house museum.

Anna Maria Pittman Lee was a teacher, Methodist missionary, and accomplished poet who traveled to Oregon Country in 1837 to live and work at the Willamette Mission. She was the wife of Methodist missionary Jason Lee. This portrait of her is held by the Oregon Historical Society, possibly donated by Anna's …