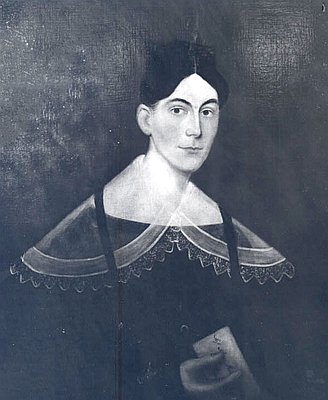 Anna Maria Pittman Lee was a teacher, Methodist missionary, and accomplished poet who traveled to Oregon Country in 1837 to live and work at the Willamette Mission. She was the wife of Methodist missionary Jason Lee. This portrait of her is held by the Oregon Historical Society, possibly donated by Anna's nephew, Edgar Briggs Pittman. The artist has been tentatively identified as Ammi Phillips (1788-1865), a portrait painter from New York.

Pittman was born in 1803 in New York to a middle-class family. She was well educated and reportedly had heard many stories about the West from family friend John Jacob Astor. When she was still a young woman, she requested the Methodist Missionary Society to send her west so she could teach and minister to Native populations. Her request was not granted, however, for many years. Finally, in 1836, she and several other missionaries sailed to Oregon Country in response to a plea from Jason Lee for help there at his school for Native children. In a letter to her brother dated June 9, 1836, she wrote: “The time is drawing nigh when I must bid a long farewell to all I love. I quit the scenes of my youth, the land of my birth, and in a far and distant land among strangers I expect to dwell.”

The Methodist Missionary Society suggested to her that she would be an ideal wife for Lee. It is unknown what she thought of this matchmaking; but her letters and journals make clear that her journey west had purpose beyond marriage and housekeeping. She turned thirty-three while on the voyage to Oregon Country, and her journal entry for that day provides insight into her motivation for leaving home to endure the hardship of resettlement: “33. years of my life forever gone; and alas how little of that time has been spent in doing good. Oh if my life is spared another year I trust I shall be enabled to do something for God, who has done so much for me.”

Pittman and the other missionaries arrived at Fort Vancouver in May 1837. By her account, Chief Factor John McLoughlin was a generous and helpful host, and he sent some of his men up the Willamette to let Lee know that the new missionaries had arrived. Lee had received word that the Missionary Society was sending him a wife, and although he expressed a desire for marriage in his diary (“I looked forward with glowing interest to that hour when ripening manhood should qualify me to a beautiful, wise and lovely daughter of Eve”), his first reaction to Pittman was not promising. Lee described their meeting in his diary:

"In our first reinforcement in the summer of 1837 there were three single ladies, one of which was not engaged. I had seen her before in N.Y. City, but was not at all favourably impressed with her personal appearance, and least of all, did not think she would ever become my wife; even when I was informed by letter that she was coming to Oregon, and on my first interview with her there, my prejudices remained the same. I was told that she was sent out on purpose for me, and that she had come with the expectation that I would marry her (this however was a gratuitous assertion), and was asked if I intended to do it. I stated my principles in refference [sic] [to] marriage and then replied, that though a lady should travel the world over in order to become my wife, yet I could never consent to marry her, unless, upon acquaintance, I should become satisfied, that, that step would be conducive to our mutual happiness and the glory of God."

Pittman did not recount the meeting in any surviving letters or journals, so we do not know her reaction to Lee’s initial indifference. According to an account by Dr. and Mrs. Elijah White, who traveled with Pittman, the match was the subject of curiosity for her companions, and Pittman was caught blushing in front of Lee. The account is somewhat unreliable, however, since it also asserts that Lee was clearly “pleased” with the match as evidenced by the “complaisance of his bearing, and the trouble he took to render himself agreeable.” A more fanciful account of the meeting was published by historian Eva Emery Dye in her book McLoughlin and Old Oregon (1900). It was reproduced in a Memorial Souvenir publication in 1906 in honor of Lee. Read it here.

Pittman accompanied Lee up the Willamette to the mission, and went to work assisting with the school for Native children. Within a few weeks of her arrival, Lee’s regard for her increased and he proposed. She answered him in verse, which he recorded in his diary. The first stanza offers her consent:

Yes, where thou goest I will go,

With thine my earthly lot will be cast;

In pain or pleasure, joy or woe,

Will I attend thee to the last.

Pittman wrote home to tell her family the news on June 5, 1837: “You will be anxious to know if there is any prospect of my having a Protector. Let me tell you there is. Mr. J. Lee has broached the subject. […] I expect to give my heart and hand to J. Lee. […] I have thought proper to relieve your minds that you may not think I am alone.”

They were married on July 16 of that year; they honeymooned in August on the coast, a trip that doubled as a restorative rest for Lee and missionary Cyrus Shepherd, both of whom fell ill that summer. When they returned, Anna resumed her duties at the Mission school, which were most likely cooking and sewing. The letters she sent home during that period were optimistic.

In the spring of 1838, Lee traveled to New York in order to persuade the Board of Managers of the Missionary Society to send more support and people to the Willamette Valley. Pittman was six months pregnant and stayed behind, writing to her mother that though the separation from her “dearest half” would be difficult, her dedication to her husband’s work allowed her to bear all “pain, affliction, sorrow and death with pleasure.” She wrote a poem for Lee before he left, which he recorded in his diary. It begins:

Must my dear Companion leave me.

Sad and lonely here to dwell?

If ‘tis his duty thus that calls thee,

Shall I keep thee? No, farewell;

Though my heart aches

While I bid thee thus farewell.

On June 21, she went into labor, which lasted more than two days and was extremely painful and difficult. She delivered a boy on June 23; the infant died a few days later. Pittman never recovered from childbirth, and died soon after. She was buried on June 27, 1838, a little over a year after her hopeful arrival up the Willamette River.

Lee did not receive the news until September 8, when letters from Oregon reached him in Missouri. He arranged to bring an engraved stone back with him from New York for her gravesite, which in part reads: “Beneath this sod, the first ever broken in Oregon for the reception of a white mother and child, lie the remains of Anna Maria Pittman wife of Rev. Jason Lee, with her infant son.” Pittman was reinterred in the Lee Mission cemetery in the 1840s after Lee’s second wife, Lucy Thompson, died. They are buried next to each other and to Lee, who was reinterred there in 1906.

This engraving, published in a state history in 1912, depicts the house built by the Rev. Jason Lee at the present site of Salem in 1841. The house sheltered Lee’s wife Lucy Thompson Lee and their daughter, as well as three other families connected with Methodist missionary efforts.

The commerce-oriented exploration of the North Pacific Coast by European and American sea captains became active during the 1790s. The 1792 incursions into the mouth of the Columbia River and upstream by American trader Capt. Robert Gray, soon followed by a party from the English expedition of Capt. George Vancouver, …