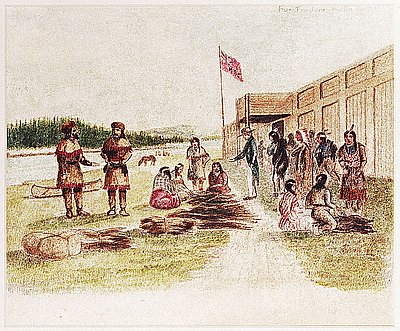 This drawing of fur trading at Fort Nez Perce (also known as Fort Walla Walla) was drawn by Joseph Drayton, one of several artists hired for a United States naval expedition led by Lieutenant Charles Wilkes from 1838 to 1842. The drawing depicts Archibald Mckinley, chief trader for the Hudson’s Bay Company at Fort Nez Perce, inspecting pelts for trade presented by Indian women.

Fort Nez Perce was constructed in 1818 by the Montreal-based North West Company. Located on the Columbia River six miles below the mouth of the Snake River and a half-mile above the mouth of the Walla Walla River, the fort was strategically sited to take advantage of the region’s indigenous trading network, while at the same time affording non-Indian fur traders a bastion of security in the midst a sometimes confrontational trading network.

In 1821 the London-based Hudson’s Bay Company (HBC) took over the administration of the fort, following a merger with the North West Company. From 1823 to 1845 Fort Nez Perce became a key post in the HBC’s efforts to denude the lands of the Columbia Plateau—south of the Columbia River—of beaver, the most highly prized fur of the land-based fur trade. Leaders of the HBC’s “fur brigades” depended upon the Umatilla, Cayuse, Nez Perce, and Walla Walla bands surrounding Fort Nez Perce for an adequate supply of horses to carry out their policy of creating a “fur desert” in the lands most easily accessible by American trappers.

The wooden fort depicted in this drawing was destroyed by fire in 1841, shortly after the visit by Joseph Drayton in his travels with the “Wilkes Expedition,” a U.S. naval expedition that visited the Pacific Northwest from May through August of 1841. The fort was rebuilt primarily of adobe and continued to be a productive post for the HBC until it was destroyed by fire again in 1855 amidst a war between Americans and several of the Indian bands of the mid-Columbia region.

Encounter with the Nez Perce

Lewis and Clark had entered the region of salmon and the people who relied on anadromous fish species to varying degrees for year-round sustenance. Unlike the buffalo-hunting tribes on the Plains, indigenous groups in the Columbia River Basin mixed hunting, root and other plant gathering, and fishing, living along major …

This photograph of Maynard White Owl Lavadour beading a cradleboard was taken by Eliza Buck in 1994. At that time, Lavadour was teaching Marlene Lavadour, Martha Franklin, Ellen Taylor, Mona Yeager, and Marcella Spencer how to make cradleboards in the tradition taught to him by his Cayuse and Nez Perce …

The Corps left Fort Clatsop on March 23, 1806, in a hurry to reach Nez Perce country and cross the mountains that had so tortured them the year before. Ten days of pushing against the Columbia’s current took them to the mouth of the Willamette River, which they had missed …