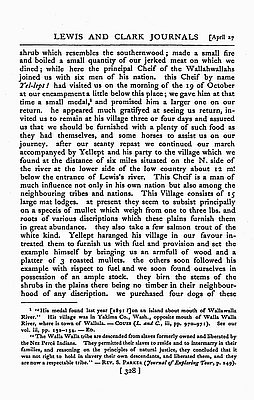 This excerpt from Meriwether Lewis’s journal describes the Corps of Discovery’s encounter with Walla Wallas and their headman Yelleppit (Tamtappam). After crossing the Umatilla River—which Lewis calls the “Youmalolam”—on their return to St. Louis, the “much fatigued” explorers stopped to eat. While encamped, they were met by Yelleppit and six others. Lewis and Clark recognized the headman from the previous fall, when the Expedition had stopped at his village near the mouth of the Walla Walla River. The captains had given Yelleppit a small peace medal and had promised to spend a few days with him the following spring.

Little is known about Yelleppit aside from what is in the journals. When the explorers met him in October 1805, Clark described him as “a bold handsom Indian, with a dignified countenance about 35 years of age, about 5 feet 8 inches high and well perpotiond.” It is unlikely that Yelleppit was his name. Yalípt is a Sahaptin word that means “trading friend,” a formal social relationship among Plateau peoples whose economy was based in large part on trading, gifting, and other forms of exchange.

Several months later, on April 27, 1806, Lewis wrote that Yelleppit was “a man of much influence not only in his own nation but also among the neighbouring tribes and nations.” The headman was interested in the American explorers, who he viewed as potential trading partners, and he persuaded them to stay at his village for a couple of days. The Walla Wallas entertained Expedition members with dancing and music, and a nearby village of Yakamas joined in the celebration.

Before the captains took their leave of the Walla Wallas, whom Lewis described as a “friendly honest people,” Yelleppit presented Clark with a “very eligant white horse” and asked for a copper kettle in return. The captains had already given away all of the kettles they could spare, so Clark presented Yelleppit with his sword instead, as well as some gun powder and a hundred musket balls. It would be twelve years before the Walla Wallas established lasting trade relations with Americans. In 1818, the Northwest Company built a trading post named Fort Nez Perce—later known as Fort Walla Walla—at the mouth of the Walla Walla River.

Lewis, Meriwether, and William Clark. The Journals of the Lewis and Clark Expedition. Vols. 5 and 7, edited by Gary E. Moulton. Lincoln: University of Nebraska Press, 1988, 1991.

Rude, Noel. Umatilla Dictionary. Seattle: University of Washington Press, in collaboration with the Confederated Tribes of the Umatilla Indian Reservation, 2014.

This excerpt from the journal of Meriwether Lewis describes a hunting accident on August 11, 1806, during which Lewis was shot by one of his men, Pierre Cruzatte, a one-eyed, half-French, half-Omaha private known for his skill as both a boatman and a fiddle-player.