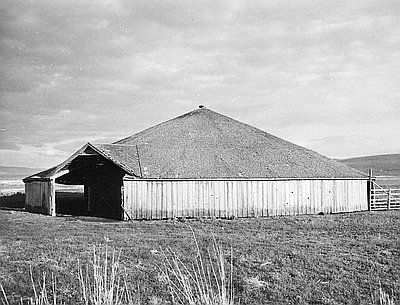 This photograph shows an unusual structure known today as the French Round Barn, located in Harney County between Malheur Lake and the town of Diamond. The photograph is undated but it was probably taken between the mid-1960s and the late 1980s.

Built in the early 1880s, the French Round Barn is not actually a barn but rather an enclosed corral designed to break horses during the high desert’s harsh winters. It was constructed under the direction of Peter French, eastern Oregon’s best known “cattle baron.” French came to Oregon from California in 1872 as an agent of Dr. Hugh Glenn, who had a large wheat and cattle operation based out of Sacramento. Over the course of the next twenty-five years, French built up the largest cattle empire in Oregon at the time, acquiring well over 100,000 acres of land and tens of thousands of head of cattle and horses before his murder at the hands of a disgruntled settler in 1897.

The French-Glenn Livestock Company built miles of fences and numerous buildings, including three round barns, only one of which remains. Inside this structure is a circular stone corral sixty-feet in diameter and two-feet thick. The umbrella-like roof is supported by a center post and a ring of interior posts, all made of juniper. The building’s two entrances and fourteen windows are framed with sawn ponderosa pine, while the roof is covered in western red cedar shingles. It has been reshingled at least twice, once in 1918 and again in 1969.

The French Round Barn was located on the French-Glenn Livestock Company’s Barton Lake Ranch, which was acquired by the Jenkins family in the early 1920s. The Jenkins stored grain and equipment in the barn for many years before donating the structure and surrounding lands to the Oregon Historical Society in 1969. The site was listed on the National Register of Historic Places in 1971.

This photograph of Peter French (seated to the left next to his wife Ella) was taken on his extensive land in Harney County--a land large enough to require a number of ranch hands seen here surrounding him. French was one of the more successful landowners in eastern Oregon during the …