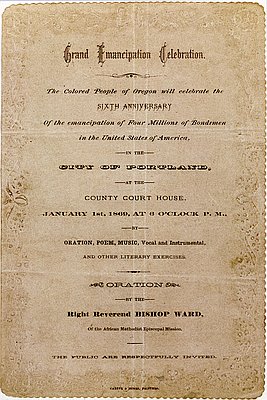 Black community leaders in Oregon issued this embossed invitation in late 1868 to raise public awareness about the “Grand Emancipation Celebration,” scheduled for January 1, 1869. The event commemorated the sixth anniversary of the Emancipation Proclamation of 1863, which freed slaves in confederate-held areas of the South during the Civil War.

Following the Civil War (1861-1865), African-Americans continued to migrate to Oregon in small numbers. As in other regions of the United States, they faced virulent racism and entrenched legal discrimination. The Oregon State Constitution, approved by white male voters in November 1857, barred blacks from voting. The Oregon legislature did approve the Thirteenth Amendment outlawing slavery in the United States. However, the legislature passed but later rescinded the Fourteenth Amendment, which guaranteed equal protection and due process to male citizens, and refused to ratify the Fifteenth Amendment, which extended the vote to black male citizens. Local and state officials imposed additional restrictions on African Americans, including segregation in housing and education, and a ban on women and non-white minorities owning firearms.

Facing both social exclusion and legal discrimination, blacks in Oregon, most of whom lived in the Portland area, created community organizations to improve their condition. Their objective was to strengthen the community from within, while also reaching out to white citizens in an attempt to change their attitude towards blacks. The community’s efforts included founding religious institutions such as the African Methodist Episcopal Church in Portland, and aid organizations such as the Portland Colored Benevolent Association, intended “to relieve the distressed, take care of widows, educate orphans, and bury the dead.” In the late 1860s and early 1870s, African Americans also marshaled an array of artistic, religious, and business leaders from within their local communities for commemorations of the signing of the Emancipation Proclamation and the 1870 ratification of the Fifteenth Amendment.  They invited everyone to these celebrations, which promoted an inclusive vision of American society in which all citizens would enjoy the same rights and privileges.