Proclamation Against the Ku Klux Klan, 1922 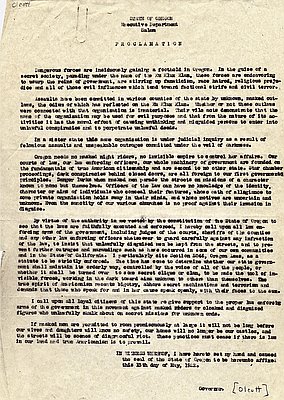 Oregon Governor Benjamin W. Olcott issued this 1922 executive proclamation in response to three assaults in southern Oregon perpetrated by members of the Medford klavern, a local organizational unit of the Ku Klux Klan. The first victim, a white piano salesman from Medford, had been kidnapped and threatened with hanging, while the other two men, one Black man and the other half Mexican, according to one account, were taken out into the country and terrorized with nonfatal lynchings, known as necktie hangings.

The Klan began organizing klaverns in Oregon in early 1921. The first was formed in Medford, and other active klaverns were in Portland, Eugene, Astoria, Tillamook, Ashland, La Grande, and many other Oregon communities. By the end of 1922, the Oregon Voter had counted fifty-eight klaverns across the state.

The Oregon Klan focused most of their attention on Catholics, who made up about 8 percent of the state’s population. In 1922, the Klan successfully backed a statewide ballot measure making it mandatory for children to attend public school, an attempt by the organization to shut down private Catholic schools. Federal courts later ruled the measure unconstitutional.

The Klan also backed several candidates for local and statewide offices in the election of 1922, campaigns that were vigorously opposed by anti-Klan Oregonians. Despite this opposition, Olcott, the Republican incumbent, lost the gubernatorial race by a wide margin to Democrat Walter Pierce, who was endorsed by the Klan.

The Klan’s influence on state politics was fleeting, however. The organization faced strong opposition from many Oregonians and suffered from internal strife as well, caused by leadership struggles, organizational fragmentation, and state and national scandals involving prominent Klansmen. By the end of the 1920s, the KKK’s influence on both state and national politics had all but disappeared.

Toy, Eckard V. “Robe and Gown: The Ku Klux Klan in Eugene, Oregon, during the 1920s.” In The Invisible Empire in the West, edited by Shawn Lay. Urbana: University of Illinois Press, 1992.

This letter, written in 1923 by W. R. Burner of Holland, in Josephine County, to outgoing Oregon Governor Benjamin Olcott, hints at the social and political divisiveness caused by the Invisible Empire of the Knights of the Ku Klux Klan in Oregon during the 1920s.

This pamphlet, whose title page is shown here, contained an edited version of “The Truth about the Invisible Empire, Knights of the Ku Klux Klan,” a pro-Klan lecture presented at Portland’s Municipal Auditorium on December 22, 1921. A showing of the pro-Klan film, The Face at Your Window, …