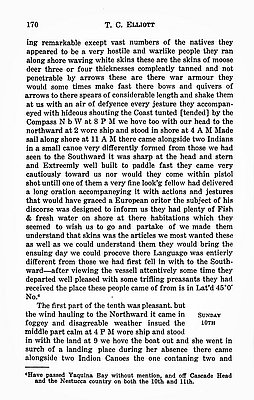 Nineteen-year-old Bostonian Robert Haswell wrote the journal entries reproduced here in August 1788; they were published in the Oregon Historical Quarterly 140 years later. Haswell was third officer of the Washington, an American sloop under the command of Captain Robert Gray that had traveled from Boston to the Northwest Coast in search of sea otter skins.

Haswell’s entry for August 10 begins with a description of two Indian canoes that had come along side the Washington to trade otter skins in the vicinity of present-day Lincoln City. Haswell notes the cautious behavior of the Indians, who were probably Tillamook. He also observes that two or three of them had been scarred by smallpox, a highly contagious disease that was probably introduced by fur traders about ten years earlier. This reference and the reference to iron knives suggest that the Tillamook had previously encountered white trading vessels.

On August 14, a party from the Washington entered what was probably Tillamook Bay looking to buy otter skins. The Tillamook Indians were friendly at first, offering the scurvy-ridden sailors an abundance of berries, crabs, and salmon, as well as otter skins.

Things turned sour two days later, though. A young man by the name of Marcus Lopez, a native of West Africa’s Cape Verde Islands, discovered that a Tillamook man had taken his cutlass, a short curved sword often carried by sailors. Lopez chased after the man, but soon found himself surrounded by a group of well-armed Tillamook warriors, who quickly killed the unfortunate young sailor.

The other crewmen of the Washington, seeing themselves heavily outnumbered, ran to their longboat and paddled as fast as they could for the sloop, narrowly avoiding being cut off by Tillamook war canoes. The fur traders named the place Murderers Harbor in commemoration of what happened to Lopez, who was probably the first person of African descent to set foot in what would later become the state of Oregon.