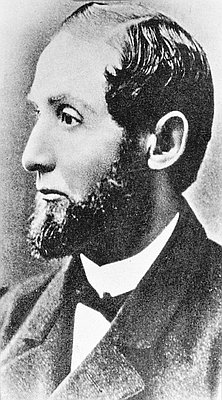 The portrait above shows Henry Miller (1827-1916), a German immigrant who started off as a butcher in San Francisco and rose to become one of the most successful businessmen in the American West.

Henry Miller and Charles Lux, another immigrant butcher from Germany, formed a partnership in 1858, quickly becoming prosperous selling beef during the California Gold Rush. Over the course of the next several decades Miller and Lux acquired a massive land empire, owning outright over 1.25 million acres of land that stretched from California’s San Joaquin Valley across northwestern Nevada and northward over much of Oregon’s Harney County and Idaho’s Owhyee County into the Blue Mountains of Baker and Grant counties, Oregon.

Organized as the “Pacific Live Stock Company,” Miller and Lux’s string of Oregon ranches were overseen by their trusted lieutenant John Gilchrist. The initials P.L.S.C. soon became a detested symbol of “ruthless monopoly” to many of the region’s smaller ranchers and other newer residents. Although arriving with a contingent of Californio vaqueros, Gilchrist soon initiated a “hire-local” policy for buckaroos and other ranch hands so as to build good will with the company’s growing number of white neighbors. Still, P.L.S.C. found its hay fields subject to late-summer arson fires and its herds to ongoing rustling by disgruntled settlers.

Lake County also had large absentee-owned livestock operations, the most significant of which came late in the nineteenth century when James “Turk” Haggin—Miller and Lux’s main California competitor, as well as their fierce opponent in various water-right legal battles—bought up rich pastureland along the Chewaucan River, which Haggin and his descendants steadily developed into the sprawling ZX Ranch.

The massive herds of the “cattle barons” had a signficiant influence on southeastern Oregon’s landscape. In his classic study, On the Cattle Ranges of the Oregon Country, historian J. Orin Oliphant documents that overgrazing during the late nineteenth and early twentieth centuries contributed to the widespread conversion of the high desert’s bunchgrass-studded hillsides to far less desirable sagebrush.

Oliphant, J. Orin. On the Cattle Ranges of the Oregon Country. Seattle, Wash., 1968.