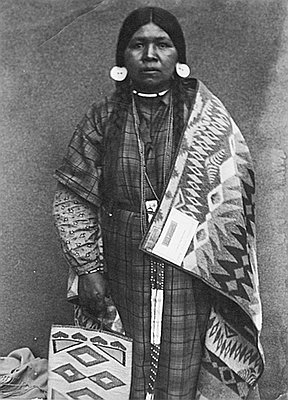 This photograph, taken by Thomas Leeander Moorhouse (1850-1926) of Pendleton, Oregon, depicts a Plateau Indian woman displaying a new Pendleton blanket. Pendleton Woolen Mills sold the Indian trade blanket in its 1910 catalog. Indian trade blankets--also called "Indian robes"--are machine-woven blankets that companies produced specifically for Indian markets. By the 1830s, trade blankets had largely replaced the labor-intensive, Indian-made wool robes and skins worn by Native people in North America. Quality production and design earned the Pendleton blankets a favorable reputation among Indian and non-Indian communities alike. Pendleton Woolen Mills was one of five major manufacturers of Indian trade blankets in the United States during the first decades of the twentieth century--and is the only one of the five still producing the product today (2007).

In 1893, prominent citizens of Pendleton, Oregon, established a wool processing plant in the Eastern Oregon town. The location for such a venture was favorable, as the region was well-known for its quality wool production. Two years later, the Pendleton Woolen Mills opened and began making garments out of the processed wool.

The decision to market its products to Indian populations was calculated. Close proximity to the Umatilla Indian Reservation offered the woolen mills an immediate market. Company leaders solicited Umatilla Indians to model the colorful blankets for advertising purposes. Pendleton Woolen Mills sent factory representatives to reservations throughout the western United States to learn color and design preferences of different tribes.

The woolen mills capitalized on the success they gained within Indian markets in order to sell the blankets to non-Indians by romanticizing their use by Indians in advertising material. Sometimes derogatory in tone, catalog text frequently included descriptions of Native traditions and customs. The company printed endorsements from Indians and established commemorative patterns named for well-known individuals such as Chief Joseph. Although Pendleton Woolen Mills has cut back on the hundreds of blanket designs it produced prior to World War II, the product is still important to the company today.