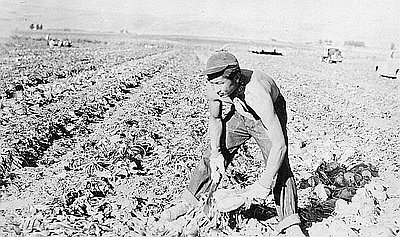 This 1943 Oregonian photograph shows a Japanese American “evacuee” topping sugar beets in Nyssa, a small town on the Idaho state line in Malheur County. On February 19, 1942, President Franklin D. Roosevelt had signed Executive Order 9066, which authorized the U.S. Army to remove and incarcerate “any and all persons” from the West Coast. There was an acute agricultural labor shortage in Malheur County, however, and the Amalgamated Sugar Company and local farmers persuaded the War Relocation Authority to give 400 Japanese the choice of remaining imprisoned or working as laborers. It was the only place in Oregon where Japanese were allowed to live outside of relocation centers.

In early May 1942, several hundred Japanese families moved into a former Farm Security Administration (FSA) camp near Nyssa. Amalgamated Sugar, which owned a sugar beet factory in Nyssa, paid their wages and living expenses. While many local farmers welcomed the laborers and appreciated the quality of their work, there was anti-Japanese sentiment in the area. Malheur County officials attempted unsuccessfully to prevent Japanese Americans from owning land, for example, and some Nyssa residents claimed that the workers were too demanding when they requested that electricity be wired to their camp.

Many Japanese families moved to the farms where they worked, and some stayed in the area after the war ended. In 2000, Malheur County had the highest percentage of Japanese Americans in Oregon (still less than two percent of its population).

Portland lost thousands of potential workers in the spring of 1942, when its residents of Japanese descent, were forcibly removed and incarcerated. During the war, 120,000 U.S. residents of Japanese ancestry were moved from the West Coast to concentration camps. The Oregonian argued cautiously in December 1941 that individual Japanese …