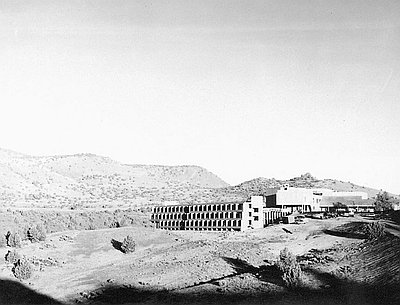 The Kah-Nee-Ta hot springs have been used by Indian people since before contact with Euro Americans.  The land surrounding the hot springs was removed from communal ownership sometime after the passage of the Dawes Act, also known as the General Allotment Act of 1887.  Under the terms of the act, reservation land was to be reassigned to individual tribal members, a federal strategy designed to foster the assimilation of the nation’s Indian people.  Once allotted, the land passed into fee-title status, giving the land owner(s) the right to sell their property to non-Indians.  In 1935, F. B. Freeland, a physician from Portland purchased the 320 acres surrounding the mineral springs for $35,000 and quickly developed a small-scale resort.

In the 1950s, the Warm Springs tribes negotiated a $4,451,784 settlement from the U.S. Army Corps of Engineers for the loss of Celilo Falls.  Unlike the other tribes that received similar settlements, the Warm Springs tribal council decided to disperse only a quarter of the funds, $500 per person, to individual tribal members, saving the rest for future economic development projects on the reservation.  In 1959, a special act of Congress was passed to allow the tribe to buy back the hot springs, and in 1961 the original 320 acres were purchased for $165,000. The development of the hot springs, which flow at a rate of 500 gallons per minute, became one of the first reservation projects that used the Celilo funds.

The development of the hot springs as a vacation destination has occured in stages.  First, the tribes built swimming pools, overnight lodging, riding stables, a restaurant, and large hand-sewn teepes—all in service by 1964.  In 1965, the tribe began planning for the second stage of development, which included the construction of the multi-million dollar lodge built by the architectural firm of Zimmer-Gunsul-Frasca, an additional swimming pool and restaurant, trail system, nearby landing strip, and a nine-hole golf course.  In 1974, the tribe expanded the resort again, adding another fifty-five rooms, more banquet facilities, another nine holes to their golf course, and four tennis courts.  The tribes added the $6 million Indian Head Casino to the amenities offered to visitors at the Kah-Nee-Ta Vacation Resort in 1995, and in 2001 officially changed the resort’s name to the Kah-Nee-Ta High Desert Resort and Casino.

In 1938, four years after the congressional passage of the Indian Reorganization Act, the Warm Springs tribes became officially incorporated as the Confederated Tribes of the Warm Springs Reservation.  As a corporation, they effectively took directive control away from the U.S. Bureau of Indian Affairs and placed it in the …