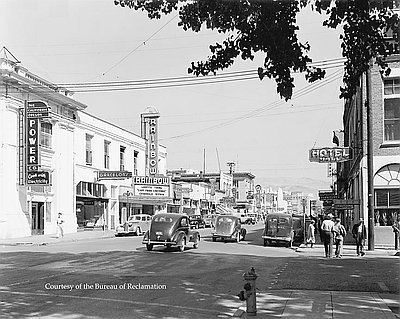 In 1860, the Federal Government granted the states swamplands, and by 1867, Oregon opened these lands to settlers.  That same year, “swampgrabber” George Nurse secured 160 acres of marshy land and established Linkville on the eastern bank of the Link River between Upper Klamath Lake and Lake Ewauna.  By 1885, the modest-sized town of 384 people maintained seven stores, three hotels, and four saloons, and was served by four doctors, four lawyers, and a newspaper.

Despite this growth, there was no reason to suspect Linkville would ever grow much larger.  In 1893, the town was renamed Klamath Falls to embrace its location along the river and imply that it was larger than a village.  Nevertheless, railroads bypassed the town, impeding the economic growth of the town’s lumber mills and area farmers.

In 1906, the U.S. Reclamation Service began construction on the Klamath Reclamation Project to provide irrigation water to thousands of acres of potential farmland.  That summer, three railroad builders negotiated with local and state leaders for right of ways and land grants in Klamath Falls.  The Southern Pacific Railroad completed a line from Weed, California to Klamath Falls in 1909, and soon after, 90 new businesses and public buildings, including a high school, were opened or under construction.  By the 1920s, Klamath Falls had grown into a bustling town of sawmills, retail and wholesale businesses, services, and entertainment for Northern Californians and rural Oregonians.  In the 1940s, the town boasted of six theaters, some for movies and others for live entertainment.  Several brothels and saloons entertained those with less inhibition.  During World War II, Klamath Falls welcomed new soldiers stationed at a recently constructed Marine barracks and naval air station.  Local businesses were thankful for their money.  After the war, veteran homesteaders contributed to the area’s agricultural economy and local lumber mills benefited from the booming housing market.

Today, the slumping timber industry and the water allocation crisis have forced political and business leaders to promote other economic sources, such as tourism and recreation, to support Klamath Falls and the region.

This photograph shows the new headquarters of the First National Bank of Klamath Falls in November 1930.

At the beginning of the nationwide Depression, the two major banks in Klamath Falls each erected new headquarters. During the preceding decade, the city’s population had skyrocketed, from 4,801 in 1920 to 16,093 …