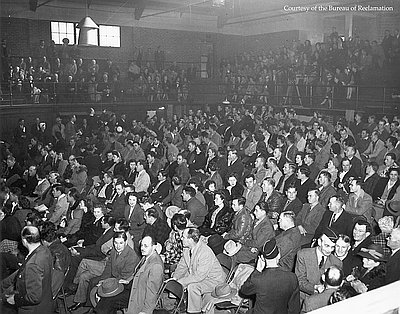 In December 1946, the first of three post-World War II drawings took place in Klamath Falls.  This photograph shows hundreds of soldiers and their spouses waiting anxiously for the names to be announced at a drawing in 1948.  Between 1946 and 1949, more than 200 homesteads were awarded to veterans with at least two years of agricultural experience, $2,000 or more in personal savings, and proof of “honesty, temperance, thrift, and industry.”  The gift of land and promise of unlimited irrigation was in exchange for populating the Klamath Basin and stimulating the economies in southeastern Oregon and northeastern California.

As a result of the twenty-first century water crisis in the Klamath Basin, many of the veteran homesteaders have felt “betrayed by their government” and have expressed feelings of hopelessness as to the future of farming in the area.  Low precipitation and snowpack in 2000 forced the Bureau of Reclamation in 2001 to limit water to farmers in order to comply with the Endangered Species Act, which protects coho salmon, Lost River suckers, and shortnose suckers.  Limited water supplies, resources farmers believed were allocated for irrigation, were needed to keep lake and river levels and conditions tolerable for fish.