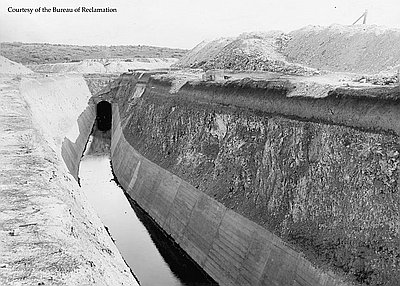 Construction of the Klamath Reclamation Project, a federally constructed and managed irrigation system, began in 1906 with the building of the Main Canal, or “A” Canal, and tunnel. Stretching 3,300 feet, the tunnel can deliver up to 1,150 cubic feet of water per second from Upper Klamath Lake to irrigate approximately 63,000 acres.

Irrigation of the Klamath Basin was initiated by early settlers who dug ditches to divert water from nearby streams or rivers. By the 1880s, private interests had built larger canals such as the Adams Canal from White Lake to certain farms in 1886 and the Ankeny Canal from the Link River to other farms in 1887. These projects, nonetheless, did not serve the majority of Klamath Basin farmers.

At the turn of the century, Western farmers petitioned the Federal Government to invest in irrigation. In June 1902, Congress passed the Reclamation Act creating the Reclamation Service to initiate, construct, and manage irrigation projects in the West. The Reclamation Service, renamed the Bureau of Reclamation (BOR) in 1923, began 30 projects from 1902 to 1907 and currently operates 180 projects in 17 western states. The Klamath project supplies water for approximately 240,000 acres of cropland. Its primary sources of water are Upper Klamath Lake and the Klamath River. Clear Lake Reservoir, Gerber Reservoir, and Lost River are secondary sources for Klamath Basin irrigation.

A current debate in the Klamath Basin is whether U.S. Government water policies adequately address the needs of both wildlife and area farmers. The BOR controls water flow and decides, based on biological surveys, whether water levels meet the needs of endangered fish as specified in the Endangered Species Act. In 2001, when water levels were not adequate for fish to survive, the BOR withheld valuable irrigation water from local farmers.