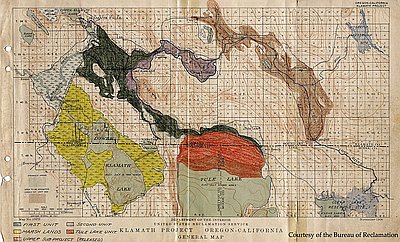 At the end of the nineteenth century, the U.S. Government had invested in numerous projects to improve the infrastructure of America.  Congress had passed appropriations to fund roads, river navigation, harbors, canals, and railroads.  By 1900, settlers in the American West wanted the government to invest in irrigation projects.  In response, Democrat and Republican congressional candidates adopted pro-irrigation platforms in the 1900 election.  Two years later, Congress passed the Reclamation Act, which provided funds to build dams, drain lakes and marshes, and dig canals to irrigate farm land.  These projects were designed to “reclaim” arid land for human use.  This map, created in November 1908, shows the Klamath Basin’s water sources, the canals running from these sources, and the potential area to be irrigated.

In its first six years, the Reclamation Service—renamed the Bureau of Reclamation in 1923—initiated nearly 30 projects in the West.  Most of the projects were completed during the 1930s with help from New Deal federal aid programs.  After World War II, many more projects were initiated and completed.  The environmental movement of the late 1960s and early 1970s, however, created strong opposition to water development projects, fearing that the depletion of the natural water system endangered wildlife populations.  Currently, the Bureau of Reclamation operates nearly 180 water and land projects in 17 states.

Construction of the Klamath Reclamation Project, a federally constructed and managed irrigation system, began in 1906 with the building of the Main Canal, or “A” Canal, and tunnel. Stretching 3,300 feet, the tunnel can deliver up to 1,150 cubic feet of water per second from Upper Klamath Lake to irrigate …

In 1902, Congress passed the Reclamation Act to provide funds to build dams, drain lakes and marshes, and dig canals to irrigate farm land in the West.  These projects were designed to “reclaim” arid land for human use.  This 1998 map shows the Klamath Water Project’s elaborate canal, tunnel, sump, …

Laborers on the Klamath Project

The Civilian Conservation Corps (CCC) was a New Deal program proposed in 1933 by President Franklin D. Roosevelt to provide jobs for unemployed Americans during the Depression.  This photograph shows CCC laborers digging an irrigation ditch in 1938 for the Klamath Reclamation Project, a federal program to drain Klamath Basin …