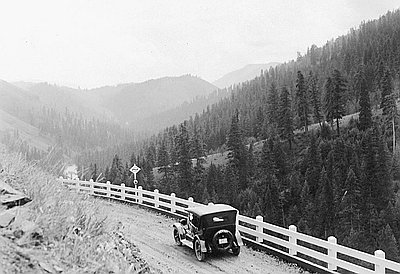 This photograph was taken by La Grande photographer William Geughan in July 1923. It shows a car driving down the La Grande-Wallowa Lake Highway near the Minam River.

The first automobiles in Oregon were novelty items, owned primarily by men of means. By 1917, however, State Highway Commissioner E.J. Adams remarked that “within the last ten years the automobile has very largely taken the place of the horse upon the road, and we are just now entering, to a greater degree than ever before, upon the use of auto trucks in place of the draft horse.”

The rise in automobile ownership was accompanied by a movement for road improvement, known as the good roads movement. The good roads movement had its origin in the 1880s, when bicyclists associated with the League of American Wheelmen began lobbying for improved road surfaces on which to ride. Out of this bicyclists’ movement grew a national organization devoted exclusively to road improvement, the National League of Good Roads, organized in 1892. The following year the Office of Road Inquiry, the predecessor agency of the Federal Highway Administration, was established within the U.S. Department of Agriculture. This federal agency promoted the spread of the good roads movement throughout the country by collecting and disseminating information on road laws and methods of road construction.

Oregon hosted its first good roads convention in 1896, but it was not until the 1910s that the state’s good roads movement gained momentum. In its first annual report, the state highway commission, established in 1913, reported that there were only a few miles of paved or oiled roads outside of urban areas, and only “a few hundred miles of roads with width, alignment, and surface sufficiently adequate to warrant their use by automobiles—and then only during the dry summer months and at low speeds.”

The woeful condition of Oregon’ roads motivated the state to embark upon a massive road construction program. The Columbia River Highway, which opened in 1915, was the first major project. Other road projects soon followed, financed by auto license fees, instituted in 1907, and a 1910 constitutional amendment that authorized counties to issue bonds for road projects. In 1919, Oregon established a gasoline tax for road projects, the first in the nation. By 1920 there were over 700 miles of paved roads in Oregon, a remarkable improvement in the state’s transportation infrastructure.

This 1936 photograph shows men building the Wolf Creek Highway, which later was renamed the Sunset Highway (US 26) in honor of a Portland area National Guard unit that fought in World War II. The federal Works Progress Administration (WPA) hired the workers and started the project as part of …