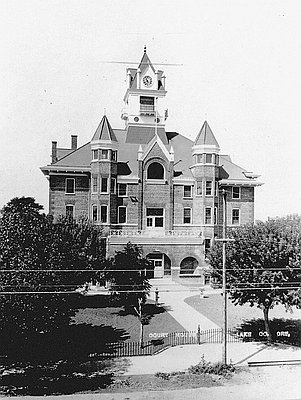 Lake County was established by the state legislature in 1874, with its first seat of government at Linkville—now Klamath Falls. The county seat was soon moved east to Lakeview, where it remained after Klamath County was split off in 1882. By 1900, Lake County’s 8,136 square miles had 2,847 residents, a figure that increased to 4,658 by 1910. Lake County was arid, a vast tract of high-elevation basin-and-rim landscape that was dotted with numerous shallow lakes and marshes. A land of large cattle and sheep ranches, Lake County had anticipated a railroad for more than a decade, but it was not until December 1911 that the narrow-gauge Nevada-California-Oregon finally arrived from Reno.

In the fall of 1909, the Oregon Valley Land Company (OLV) conducted a huge land sale disposing of the remainder of the unfulfilled land grants of the Oregon Central Military Wagon Road of the 1860s. Boosted by extensive advertising and the promise of a railroad, some 14,000 parcels of rural land totaling 340,000 acres were sold in one week; every parcel included a separate town lot in Lakeview. Thousands of people came for a brief look and bought land, while hundreds of others purchased property sight unseen. The Lake County Examiner of March 4, 1909 insisted that Lake County was “the future garden spot of the Northwest,” but the sale was a real estate scam. Very few purchasers ever lived on or used their property for farming or ranching.

The rising economic hopes of Lake County in these heady times inspired a new courthouse. A sketch of it appeared in the Lake County Examiner of June 25, 1908, where an article noted that Charles W. Casky of Seattle was the chief carpenter and W. A. Wingate of Lakeview the overseer of mason and brick work, but made no mention of an architect. The style is vaguely Queen Anne, and later news articles say that the design was based on a Nebraska courthouse of 1876 or 1886; it was not a building built in the latest fashionable style. The tower housed a four-faced clock and a set of chimes imported from Baltimore, while the bricks were made in Lakeview. The building held county offices, a courtroom and judge’s office, and the jail. The tower and clock gave the building a monumentality that reflected the significance of local government and the ambitions of Lake County’s populace in the 1900s.

The courthouse stood until it was replaced by a single-story structure of steel and concrete in 1954. The disposition of the clock and its chimes is unknown.

A map of Oregon’s high desert country is splattered with lakes; yet those who visit them may be in for a surprise. In the desert heat so much water evaporates that entire lakes may disappear from time to time. According to the WPA Guide to Oregon, emigrants traveling the Applegate …

Born in New York in 1820, George Nurse, pictured here circa 1900, entered the Oregon Country through California in the early 1860s.  In 1860, the Federal Government granted the states swamplands, and by 1867, Oregon opened these lands to settlers.  That same year, after securing 160 acres from the state, …