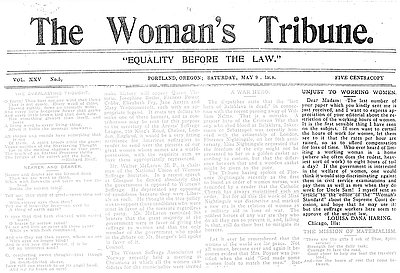 In this letter to editor Clara Bewick Colby of the Woman’s Tribune, author Louisa Dana Haring of Chicago, Illinois expressed her distaste for laws that limited the hours women could lawfully earn a wage when no limit existed for men. “Who ever heard of limiting a working woman in a home (where she often does the rudest, heaviest sort of work) to eight hours of toil a day?” asked Harding. She considered such laws to be discriminatory because they curtailed women’s earning power. The letter appeared in the newspaper only weeks after the Supreme Court announced its Muller v. Oregon decision to uphold an Oregon state law which limited the hours women could work in factories and laundries.

Suffragist Clara Bewick Colby created the Woman’s Tribune in 1883 in Beatrice, Nebraska. In 1904, Bewick Colby moved the suffrage newspaper to Portland, Oregon, in part because she anticipated the suffrage movement’s next successes to come from the region. Bewick Colby published articles on a wide variety of topics. As a freelance editor, she often spoke her mind—even when her views diverged from those of others working toward women’s suffrage.

Approximately a month following the Oregon Supreme Court’s ruling in the Muller case, for example, she wrote that the government should treat women as individuals and should not give them a disability in the marketplace by limiting their work hours. If an individual woman happened to be a mother, and the state consequently wished to limit her hours, the state “should give her a maternity pension, which would tend to even up conditions and be better for the family,” she argued.

While such arguments resonate favorably today, they were uncommon at the time. As Harding noted in her letter to Bewick Colby, many suffragists considered the outcome of the Muller case to be entirely compatible with achieving political rights for women. Progressive-era suffragists commonly argued for the vote without disrupting the widely-accepted notion that women were fundamentally different from men. As mothers, the prevailing thought suggested, women were moral and nurturing--they would call on these traits as they voted to support much-needed social change.

This Oregonian article announced the United States Supreme Court’s opinion in the Muller v. Oregon case. It described the Court’s decision to uphold an Oregon state law that forbade employers in mechanical establishments, factories, or laundries to work their female employees longer than ten hours in one day. The Court’s …