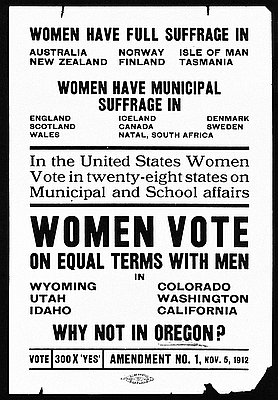 Newspaper editor, Oregon pioneer, and suffragist Abigail Scott Duniway began working for women’s rights in the 1870s, when she launched her Portland-based newspaper, the New Northwest. Between 1887 and 1912, Oregon women fought for six suffrage campaigns. Duniway and other suffragists put a state constitutional amendment for women’s suffrage before Oregon’s male voters five times. The amendment failed in 1884, 1900, 1906, and 1908 before passing in 1912.

One of the leaders of the 1912 campaign was Sara Bard Field, who traveled the state promoting women’s suffrage. Field, a poet and a pacifist, went on to work for the national suffrage movement. In 1919, Congress passed the Nineteenth Amendment to the U.S. Constitution, giving women the right to vote nationally.

Kessler, Lauren. “A Siege of the Citadels: Search for a Public Forum for the Ideas of Oregon Woman Suffrage.” Oregon Historical Quarterly 84, 1983: 117-49.

Abigail Scott Duniway, sister of Daily Oregonian editor Harvey Scott, was a novelist, newspaper publisher, teacher, pioneer, milliner, and suffragist. An overland pioneer of 1852, Duniway wrote a novel, one of Oregon’s first, based on the overland experience. Later she endured the loss of her and her husband, …

This photograph features delegates to the annual National American Woman Suffrage Association Convention in Portland, June 29 through July 5, 1905. Although most of the convention sessions were held at the First Congregational Church, this photograph was taken in front of the Oregon building on the grounds of the Lewis …