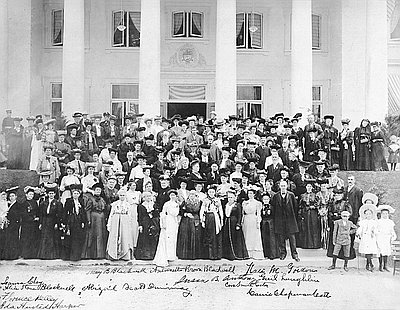 This photograph features delegates to the annual National American Woman Suffrage Association Convention in Portland, June 29 through July 5, 1905. Although most of the convention sessions were held at the First Congregational Church, this photograph was taken in front of the Oregon building on the grounds of the Lewis and Clark Exposition, where the delegates attended a reception in honor of Susan B. Anthony.

The National American Woman Suffrage Association (NAWSA) debuted in 1890 following a merger of two rival organizations, the National Woman Suffrage Association and the American Woman Suffrage Association. NAWSA leaders choose Portland for their annual convention site to coincide with the Lewis and Clark Exposition. This was part of a national strategy to further advance the cause of women’s suffrage in the western states. The national leaders thought the West offered the best terrain for short-term success in the drive to enfranchise women for two main reasons. First, by 1905 several western states had extended women the right to vote in state elections—Colorado, Idaho, Utah, and Wyoming. Second, as Anna Holman Shaw noted in her address to the convention, “it is to the West we look for greatest result in this movement because Eastern States have too great a foreign element and a foreign element is something which cannot be overcome in a generation.” Given the prevalence of anti-foreigner (or nativist) sentiments in the United States at the time, the prominent Anglo American women who led NAWSA did invoke such sentiments in their efforts to emancipate women.

During the convention, delegates heard rousing speeches by nationally-known suffragettes including Susan B. Anthony, Alice S. Blackwell, Abigail Scott Duniway, Carrie Chapman Catt, Kate Gordon, and Anna Shaw. They also listened to talks by local dignitaries such as C.E.S. Wood, who expressed support for the women, and representations from the City of Portland and the exposition, who welcomed the delegates but attempted to avoid endorsing female suffrage. Additional convention activities included discussions of future strategies. After the convention, NAWSA decided to organize the campaign in support of Oregon’s 1906 initiative to enfranchise women. Although the 1906 initiative did not pass, NAWSA’s presence increased media coverage in the state press, which had been quite limited to that point. Oregon’s male voters finally passed an initiative in 1912 granting women the right to vote.

Further Reading:
Kessler, Lauren. “A Siege of the Citadel: Search for a Public Forum for the Ideas of Oregon Woman Suffrage.” Oregon Historical Quarterly 84, 1983: 117-149.

This 1909 anti-suffrage postcard depicts a woman going to vote on election day while her “suffering” husband takes care of their children. A note on the back is hand-written: “Dear Mrs. Payne, don’t get insulted about this card it is all I have to send. I will want ten doz. …

Male politicians slowly expanded their concept of progress to include the enfranchisement of women, but women had already developed a broader agenda that they wanted to bring into the political arena. One of the leaders in the campaign for women’s suffrage in Oregon was Abigail Scott Duniway. In 1871, Duniway …