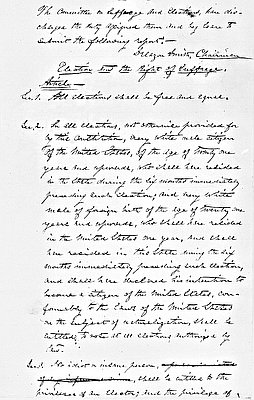 Oregon became a territory in 1848 and functioned under a system of laws that combined the original Organic Law of the Oregon Provisional Government (1845), the Northwest Ordinance of 1787, and the Territorial Enabling Act of 1848. The white male settlers who had written Oregon’s provisional government laws and pressed for territorial status shared a common political culture, the populist principles of Jacksonian democracy. Foremost among these principles was a passionate belief in popular sovereignty and an antipathy towards non-white minorities. As a result, the male settlers believed that the citizenry held an inalienable right to form a “compact” to govern civil affairs and protect private property, yet they did not include women or non-whites in this compact because they believed those groups naturally lacked the intellectual qualities necessary for conducting civil affairs.

After several negative votes in the early 1850s, Oregon voters finally approved a referendum authorizing a state constitutional convention in June 1857. In a subsequent election, voters selected delegates, and the convention met in Salem from August 17 to September 18, 1857.  The work of drafting a constitution was delegated to various committees, each charged with proposing separate articles to the full body. This report on suffrage and elections illustrates the prevalence of both democratic and agrarian interests. Several sections are intended to prevent fraud and corruption in the voting process. Others sections allow foreign residents to vote while denying that right to resident military personnel and sailors. Most importantly, the report recommends limiting suffrage to white males twenty-years or older. Women and American Indians are not mentioned, and African Americans are expressly denied the vote. In the final version of the constitution, Article two, section six also states that Chinese immigrants—identified as “Chinamen”—shall not have the “right of suffrage.” In voting to approve the proposed state constitution in November 1857, Oregon settlers additionally voted to ban slavery and exclude free Negroes from Oregon.

When the Congress voted to admit Oregon as a state in the spring of 1859, it approved the proposed constitution as written. In 1870, the Oregon legislature rejected the Fifteenth Amendment to the U.S. Constitution granting voting rights to Black adult males. Women officially gained state voting rights in 1912. American Indians gained full citizenship rights through national legislation in 1924. In late 1920s, Oregon amended the state constitution to remove the clause denying suffrage to Blacks, and repealed the Negro exclusion law of 1857. Asian Americans did not gain full citizenship until the legal reforms of the late 1940s. In 1959 Oregon voters finally ratified the Fifteenth Amendment, nearly ninety years after its official ratification by the United States in 1870.