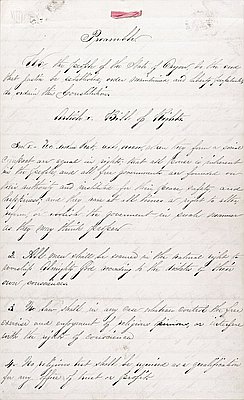 After defeating motions to organize a state constitutional convention in 1854, 1855, and 1856 due to fears that statehood would bring higher taxes, the electorate of Oregon Territory shifted direction in 1857 and voted overwhelmingly in favor of drawing up a state constitution. This change in attitude stemmed from growing concerns over the slavery question, which Chief Justice of the Oregon Territory George H. Williams called the “paramount issue” in Oregon at that time. Democrats hoped to consolidate their power despite splits in the party over slavery, while anti-Democrats sought to avoid having slavery forced upon them by the federal government in the wake of the disturbing events in “Bleeding Kansas” and the U.S. Supreme Court’s Dred Scott decision.

In August 1857 delegates from across the territory met in Salem to draw up a new state constitution. The draft of the constitution reproduced here, modeled on the constitution of Indiana, does not address slavery or the exclusion of free Blacks from the state. Rather than let slavery and “negro exclusion” dominate the discussion and paralyze the convention, the delegates decided to submit these questions directly to the voters. The delegates did agree to vote against extending suffrage rights to women and non-white men, however. The suffrage committee recommended language stating that “No negro or mulatto shall have the right of suffrage;” the delegates later added “Chinaman” to this list. Women of all races were also denied voting rights.

The constitution, together with the slavery and free Black exclusion clauses, was submitted to the voters of Oregon on November 9, 1857. The territory’s electorate, consisting of white men over the age of twenty-one, voted in favor of the constitution 7,195 to 3,195. An even larger majority voted against slavery, and a still larger majority voted against allowing free Blacks to reside in the state. Justice Williams later wrote that although many who voted in favor of the negro exclusion clause were actually against it, “it was considered necessary to throw this tub to the whale of the proslavery party to secure the success of the free state clause of the constitution.”

The U.S. Senate quickly ratified Oregon’s constitution, but the U.S. House of Representatives was split. After a bitter debate, they voted to accept it by a close vote on February 12, 1859. Two days later President James Buchanan signed the law that made Oregon the thirty-third state in the union.

Further Reading:
Carey, Charles Henry, ed. The Oregon Constitution and Proceedings and Debates of the Constitutional Convention of 1857. Salem, Oreg., 1926.

On May 2, 1843, Willamette Valley settlers met at Champoeg to vote on the formation of a provisional government. The minutes recorded by George Le Breton recount the vote in favor of the provisional government (which historians later estimated to be 52-50) and the subsequent appointments of settlers to fill the …