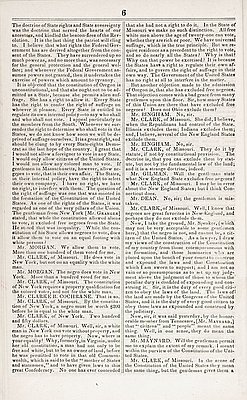 This document is an excerpt from a speech by Missouri congressman John B. Clarke in the U.S. House of Representatives supporting the admission of Oregon. He outlines the main objections to Oregon’s admission as a state and refutes them point by point. The document ends with a description of Oregon’s population by territorial delegate Joseph Lane.

In November 1857 the electorate of Oregon Territory voted overwhelmingly in favor of a newly drafted state constitution, which was to be submitted to the U.S. Congress in a bid to gain statehood. They also approved two additional clauses, one prohibiting slavery and another excluding free Blacks from residing in Oregon. The U.S. Senate quickly approved Oregon’s constitution, but the question of Oregon statehood lingered in the House, where both northern Republicans and southern Democrats brought forward a number of objections to the would-be state's constitution.

Most of those who opposed Oregon’s admission brought up three objections: (1) the exclusion of free Blacks; (2) the so-called “alien suffrage” provision of the constitution, which extended voting rights to foreign-born white men over the age of twenty-one who resided in Oregon for six months or more, and; (3) insufficient population (the 1787 Northwest Ordinance stated that a population of 60,000 was required for statehood).

The exclusion of free Blacks was by far the most controversial of the constitution’s provisions. Ohio Representative John A. Bingham called this clause “injustice and oppression incarnate,” while Massachusetts Representative Henry L. Dawes argued that Oregon’s constitution was not based on republican principles. “It makes odious distinctions among classes of men,” Dawes asserted, “among individuals of the same class. It ruthlessly tramples the rights of the citizen in the dust.” Clarke responded by pointing out that other states in the union also excluded free Blacks. Moreover, he argued, the “States, in their internal policy, have the right to select their own company,” particularly since the U.S. Supreme Court had recently ruled that Blacks were not and could not become citizens of the United States.

Many Republicans in the House were against Oregon’s admission because Oregon was a Democratic state and because Black exclusion ran counter to Republican principles. Many Democrats also opposed Oregon’s admission because it was a free state that would exacerbate the imbalance of free and slave states in the union. Despite these objections, on February 12, 1859, the House voted 114 to 108 to admit Oregon to statehood. Two days later President James Buchanan signed the bill into law, making Oregon the thirty-third state in the union.

Further Reading:
Carey, Charles Henry, ed. The Oregon Constitution and Proceedings and Debates of the Constitutional Convention of 1857. Salem, Oreg., 1926.