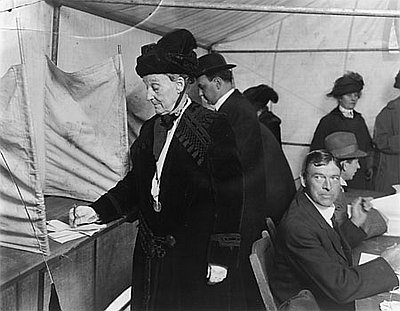 Abigail Scott Duniway, sister of Daily Oregonian editor Harvey Scott, was a novelist, newspaper publisher, teacher, pioneer, milliner, and suffragist. An overland pioneer of 1852, Duniway wrote a novel, one of Oregon’s first, based on the overland experience. Later she endured the loss of her and her husband, Ben’s, Yamhill County farm to her husband’s poor business decisions. Duniway was angered that, as a woman, she had no legal standing to prevent her husband’s faulty business dealings.

Soon after the loss of the farm, Duniway’s husband became an invalid, and primary support for the family fell to Duniway. She finished constructing a second story on their cottage so the family could rent rooms to “young lady boarders” at the school she opened and rose before dawn to finish a day’s work before going to the classroom to teach. Duniway’s experiences convinced her that women needed the right to vote. She campaigned for suffrage throughout the Pacific Northwest, and in 1871, the outspoken Duniway started a newspaper in Portland called the New Northwest. She used the paper to further her political causes.

Initially, she supported the temperance movement along with woman suffrage, but by 1890, she had divorced herself from the temperance issue because, among other things, it threatened to undermine the suffrage movement in Oregon as it had in Washington state. In 1912, when women finally gained the right to vote in Oregon, Abigail Scott Duniway was the first woman to register to vote in Multnomah County.