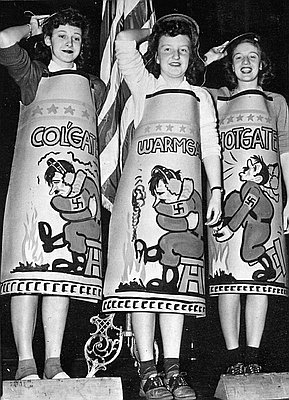 An Oregon Journal photographer took this Feb. 4, 1942, photograph of Lincoln High School students (left to right) Jeri Lesher, Bettedale Simonton, and Shirley Schneider. The trio dressed as tin tubes, commonly used at that time for toothpaste and shaving cream, and sang “Any Tubes Today,” at a kick off for Lincoln’s used tube collection drive. The student-made costumes featured images of a shivering Adolf Hitler trying to warm himself by a fire, but instead lighting his boot on fire. The costumes were labeled “Col’gate,” “Warmgate,” and “Hotgate.” In early 1943, Lincoln High School students won a city-wide school contest to collect the most scrap paper and metal.

During World War II, the federal government encouraged students to show their patriotism by collecting recyclable metals, paper, and other material. Students also bought war bonds, received training to work in war-related industries, and volunteered with government agencies to help on the “home front.”

In Portland, the school district responded enthusiastically with war-related programs. Between 1941 and 1943, the Portland Teacher’s Credit Union collected close to $100,000 by selling war stamps and bonds to students. Administrators also changed the classroom curriculum during the war, emphasizing subjects that might help students contribute to the war effort including science, electricity, the practical use of machinery, and even aviation-related mathematics.

This photograph appeared in the Oregon Journal on October 11, 1942, along with other photographs celebrating the efforts of local schools and organizations taking part in the nation’s first full-scale scrap metal drive of World War II.  The scrap drive was orchestrated by the U.S. War Productions Board and the U.S. Office …