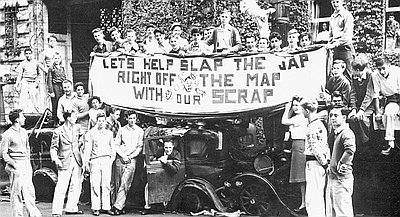 This photograph appeared in the Oregon Journal on October 11, 1942, along with other photographs celebrating the efforts of local schools and organizations taking part in the nation’s first full-scale scrap metal drive of World War II.  The scrap drive was orchestrated by the U.S. War Productions Board and the U.S. Office of Education and was promoted heavily by radio, newspaper, and motion picture companies.  Rhyming slogans using “slap the Jap” like the one in this photograph, were common during the early stages of the war effort against Japan, when Americans hoped for a quick victory against an enemy perceived by many as racially and militarily inferior to Allied forces.

During World War II, the U.S. government organized and promoted scrap-drives to cover shortages in basic materials such as metal, rubber, and paper. In October of 1942, the War Productions Board spearheaded a scrap drive with a goal of gathering 17 million tons of metal for use in the Allied effort against the Axis powers.

At the local level, scrap-drive efforts were organized through county divisions of the Office of Civilian Defense.  Oregon was assigned a quota of gathering 100,000 tons for the war effort.   Everyone was expected to contribute something, with full-page advertisements and posters addressing people directly; “Your being lazy may cost a life!  Have you turned in your 100 pounds of scrap metal…or are you shirking your duty?”  Schools responded by organizing student participation.  In Portland, competitions between nine high schools and between 54 grade schools netted a combined 1,210 tons of scrap metal.  Lincoln High won first place with a total of 200 tons of scrap collected.  As a prize, Lincoln High School students were treated to a field trip to the Oriental Theatre for a free showing of “The Major and the Minor,” a comedy starring Ginger Rogers and Ray Milland.  Nationwide, approximately 30 million children collected 1.5 million tons of metal for the scrap drive, helping the War Production Board meet its quota.  During the effort, a group of 33 students from Langlois, Oregon, won acclaim for gathering “an average of two and a half tons each”—a national record.

Psychologists and behavior specialists considered the involvement of American children in the nation’s war effort to be an important way to keep them integrated in their communities at a time when many fathers were fighting overseas and mothers had entered the workforce, leaving them potentially isolated at home.  They also hoped that the involvement of children in scrap drives and other domestic war-time campaigns would offer alternatives to delinquent activities.

An Oregon Journal photographer took this Feb. 4, 1942, photograph of Lincoln High School students (left to right) Jeri Lesher, Bettedale Simonton, and Shirley Schneider. The trio dressed as tin tubes, commonly used at that time for toothpaste and shaving cream, and sang “Any Tubes Today,” at a kick off for …