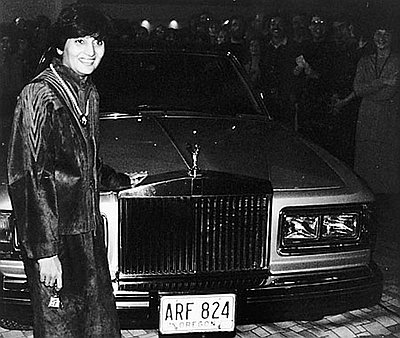 Ma Anand Sheela (also known as Ambalal Patel Sheela, Sheela Silverman, and Sheela Birnstiel) was the personal assistant to Rajneeshee sect leader Bhagwan Shree Rajneesh and the highly visible president of the Rajneesh Foundation International when it was based in Oregon from 1981 to 1985. Here she holds the keys to a gift for Rajneesh, a brand new Rolls Royce. The only person who regularly conversed with the Bhagwan, Sheela directed the commune, operating as its spokesperson to the outside world. Born Ambalal Patel Sheela in Baroda, India in 1950, she was introduced to the Bhagwan by her parents just before she left for the United States to attend university. In 1972 she returned to India and began her career with Rajneesh, later moving back to the United States and marrying an American.

On July 10, 1981, Sheela purchased the 64,000 acre Big Muddy Ranch in Central Oregon near the village of Antelope. The Rajneeshees renamed their land Rancho Rajneesh and prepared it for the arrival of Rajneesh’s followers, known as sannyasins. As Rajneeshee influence grew, so did conflicts with their neighbors. In April 1982, Sheela instructed about 60 Rajneeshees to move to Antelope so the cult could gain control of its city council in the November 1982 election. Similarly, in the spring of 1984 Sheela began a Share-A-Home program recruiting homeless people from around the country who were eligible voters in an attempt to win two seats on the Wasco County Commission. That September she instigated a salmonella outbreak in The Dalles by infecting the salad bars in 10 of the city’s restaurants, poisoning 751 people. The sect also began stockpiling weapons and protecting the commune with armed guards.

All of these activities attracted the attention of the media and authorities. On September 13, 1985, Sheela fled the commune for Europe, and on September 15, the Bhagwan himself accused her of arson, wiretapping, attempted murder, and mass poisonings. Once authorities discovered wiretapping networks and bio-terror research facilities in Sheela’s house, she was arrested in West Germany on October 28, 1985, extradited to Oregon and sentenced to ten years in a federal prison in Pleasanton, California. She was released on December 13, 1988, after just two and a half years and immediately left for Switzerland, where according to the Oregonian, she runs two private nursing homes near Basel under the name Sheela Birnstiel.

Portland was one of several areas throughout the state of Oregon where the followers of the Bhagwan Shree Rajneesh had a very visible presence during the early 1980s.  In addition to the Rajneesh Hotel at Southwest Tenth Avenue and Pine Street, they opened Zorba the Buddha disco on Portland’s South …

The Bhagwan Shree Rajneesh was the spiritual leader of the Rajneeshee religious sect headquartered at Rancho Rajneesh in the Central Oregon desert from 1981 to 1985. He attracted hundreds of thousands of red-clad followers from around the world, known as sannyasins. These followers, mostly educated and affluent, followed Rajneesh's …